THE GARRY LIIMATTA SEA MONSTER – Have we Identified This Mysterious Creature?

One of the most famous sightings of an unidentified sea creature happened in May of 1969, when angler Garry Liimatta was headed out of Kyuquot Channel, from Vancouver Island. BC. Garry saw a large, unknown marine animal, frolicking on the surface and, unlike in most sightings, managed to get some footage of it using his trusty 8mm camera (then “state-of-the-art”). The film remained hidden until 1991 and, although dark and grainy, provides a tantalizing look into this unusual sighting.

First, let’s look at the details of the sighting via an excerpt from a letter by Paul LeBlond, featured in the British Columbia Scientific Cryptozoology Club’s Newsletter, dated July, 1992: 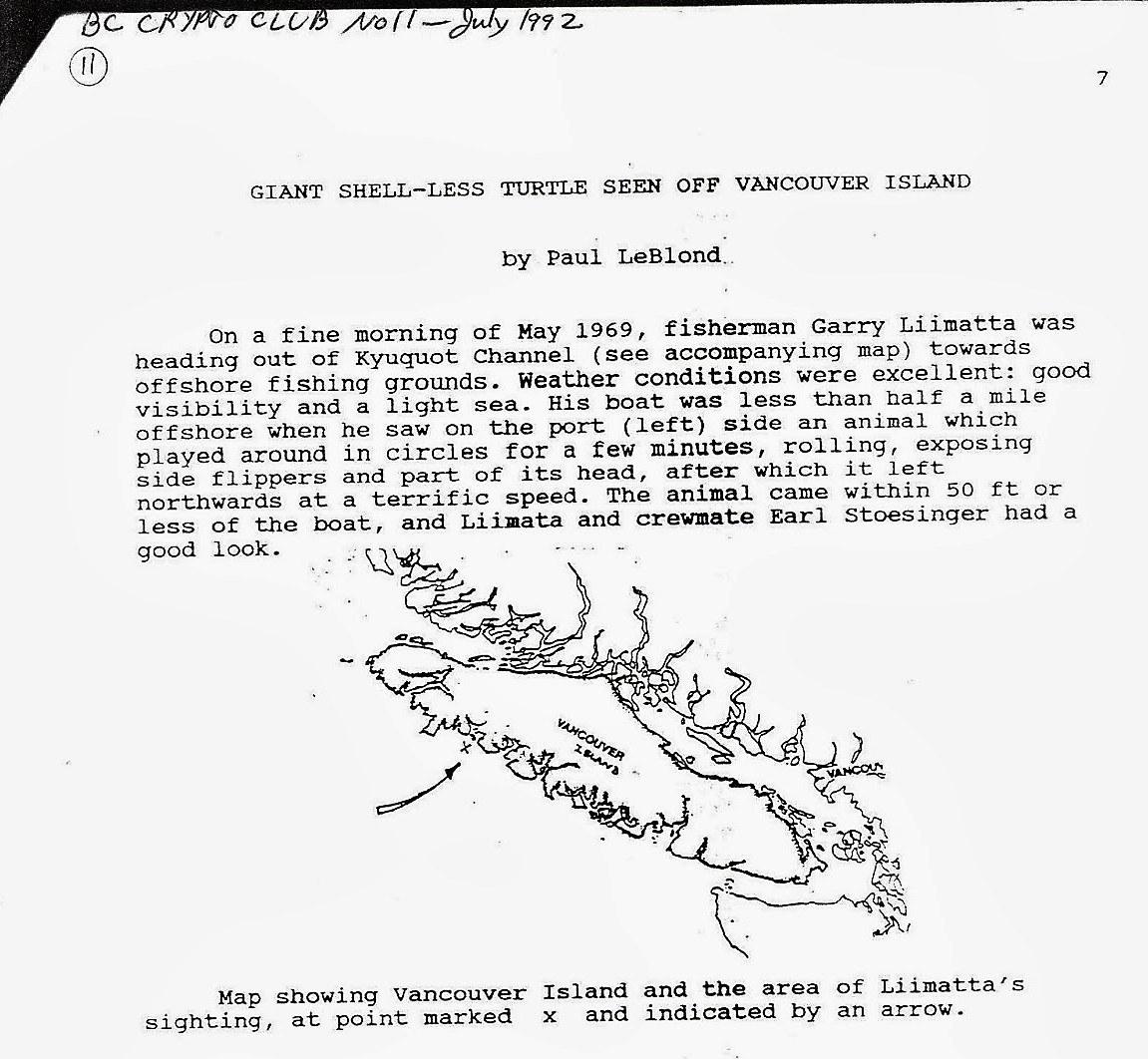 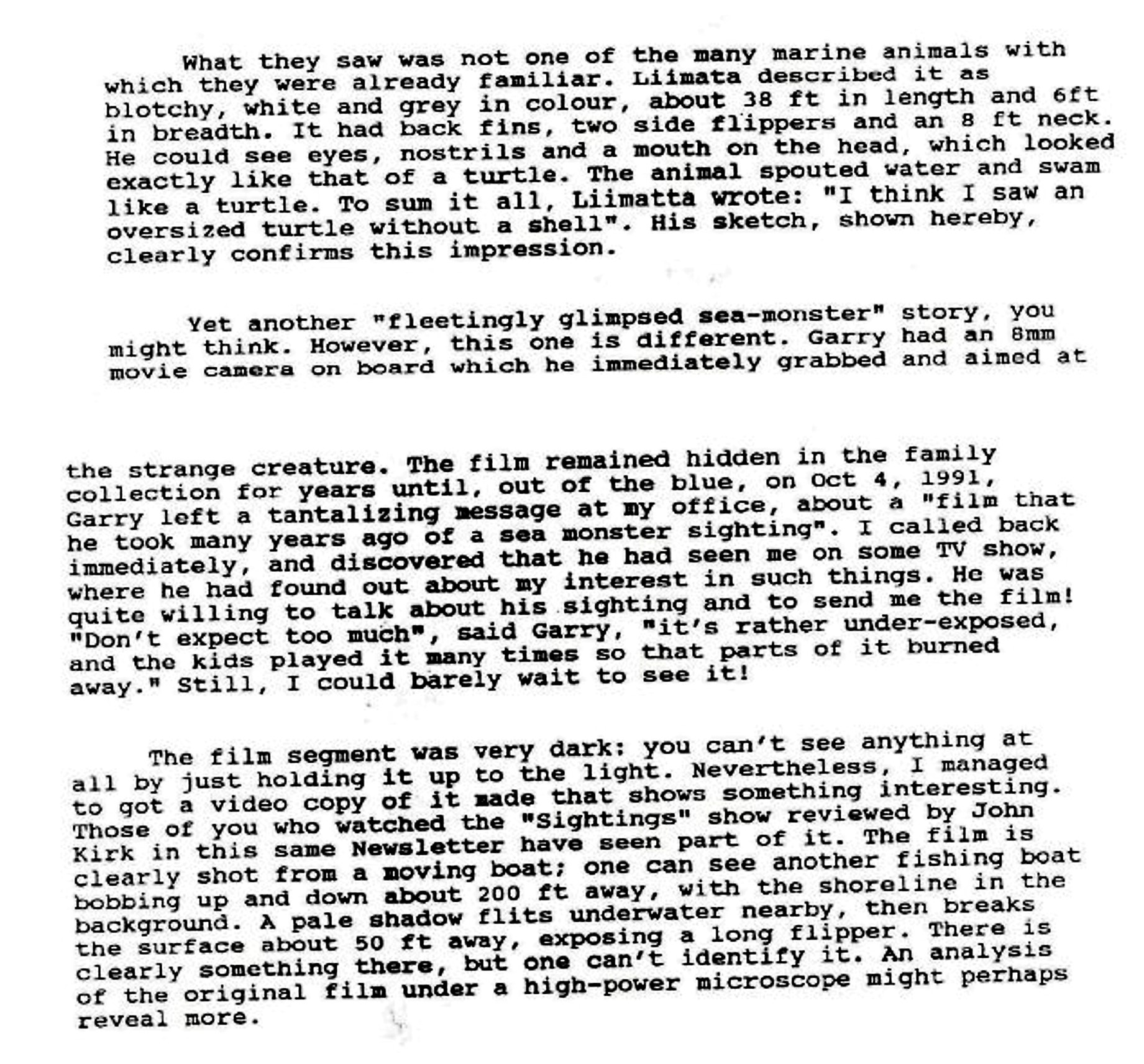 The video footage of the sighting is as follows:

When I initially viewed the footage, and still frames from it, I was under the impression that the animal in the video was a reptile of some kind – possibly even an extant pliosaur of sorts. But that was because the stills showed it more or less silhouetted, and didn’t offer any revealing details. 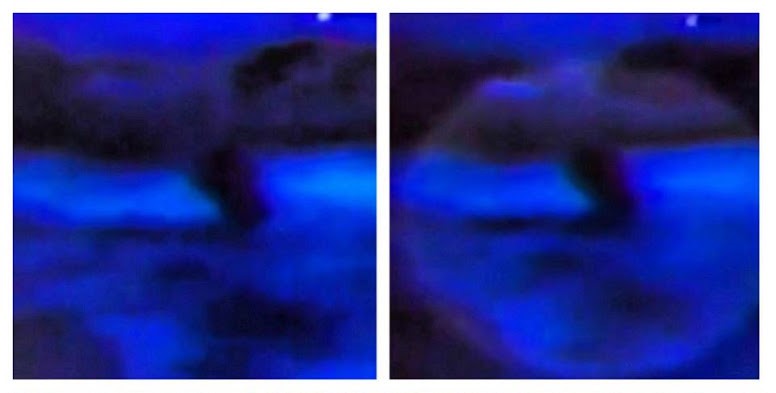 Of course, the sketch Garry did of the creature gives it a distinctive, turtle-like appearance. And, it matches his description.

With all of that and, given the face that the animal was mostly submerged and rolling around, I couldn’t help but wonder if Garry had truly seen what he described. Water refraction and glare can play tricks on the human eye. Assuming that the sighting wasn’t an elaborate hoax (Based on careful perusal of the footage, I don’t believe it was), the inevitable doubts popped into my head: Did Garry simply misidentify another animal? Could it have simply been an elephant seal or an enormous leatherback turtle? (I have personally seen the drifting carcass of a loggerhead that dwarfed the current world record of 1,200 lbs.)

I decided to do some investigating and, as I mentioned during an interview on Undiscovered Beasts and Strange Phenomena, took it upon myself to enhance the stills of the Liimatta creature, to see if anything “showed itself.” To my surprise, it did, and in a way that was far more dramatic than expected.

First, I started off with one of the ambiguous stills shown above.

Then, I began lightening and enhancing it, increasing clarity to show hidden details.

As soon as I took this next step, the image told me that Garry’s account appeared to be correct. What he witnessed was some sort of enormous, shell-less turtle. Can you see it? You’re seeing the animal’s head and neck. Look closely. You can see the distinctive shape of the eye, the brow ridges, the large beak with its considerable overbite, and even an indication of thick ridges of skin running down its neck.

I inked lines onto the enhanced and enlarged image and put it side-by-side with an unlined copy to show it more clearly.

I then went about further adjusting the contrast of the still-frame. You can now see that the more deeply shaded areas that remain after extensive lightening are key features of some huge chelonian. You can see the recessed eye, under a brow-like upper eyelid, a thick ridge of skin from the lower eyelid, directly underneath the orbit, the lower jaw, in shadow, under the beak, and those thick folds of skin running down the sides of the neck. The animal also appears to have been turning its head somewhat toward the left, presumably looking in Garry’s direction as it was being filmed. 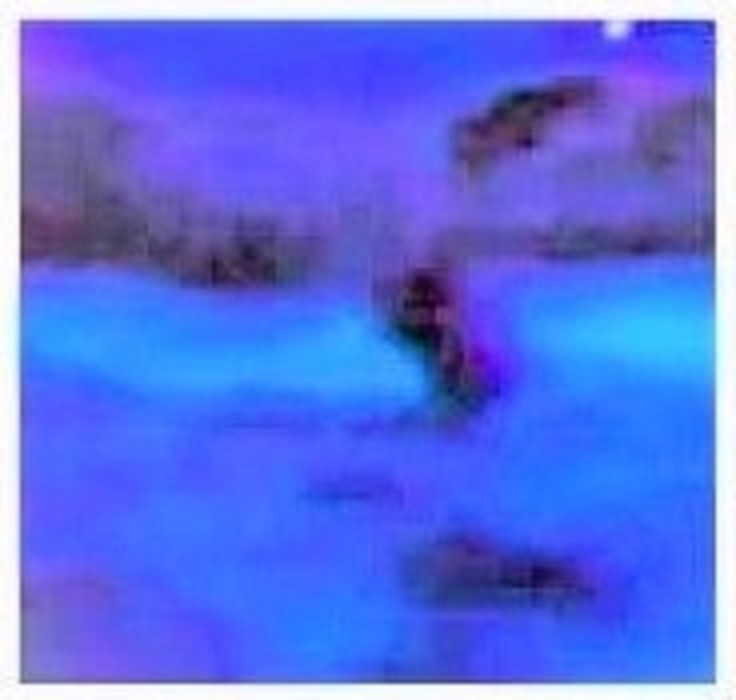 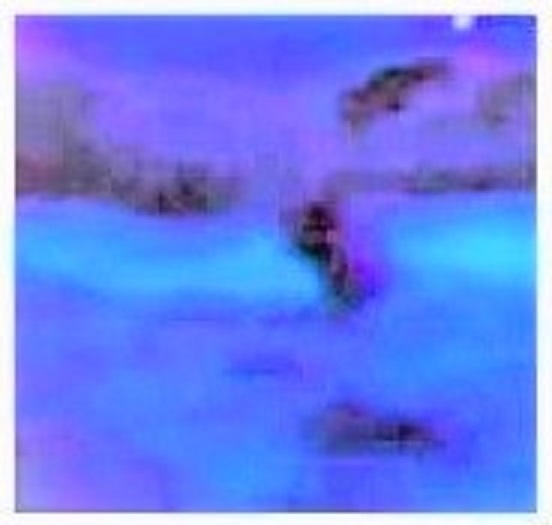 but the structure remains. In fact, if you know what to look for, it literally jumps out at you. Now, let’s compare those stills to some sea turtle images. Notice the head of this green turtle as it peeks above the surface. A similar behavior. Note the large, dark eyes, the thick lower eyelid, and the large upper jaw and beak, overshadowing the lower jaw. 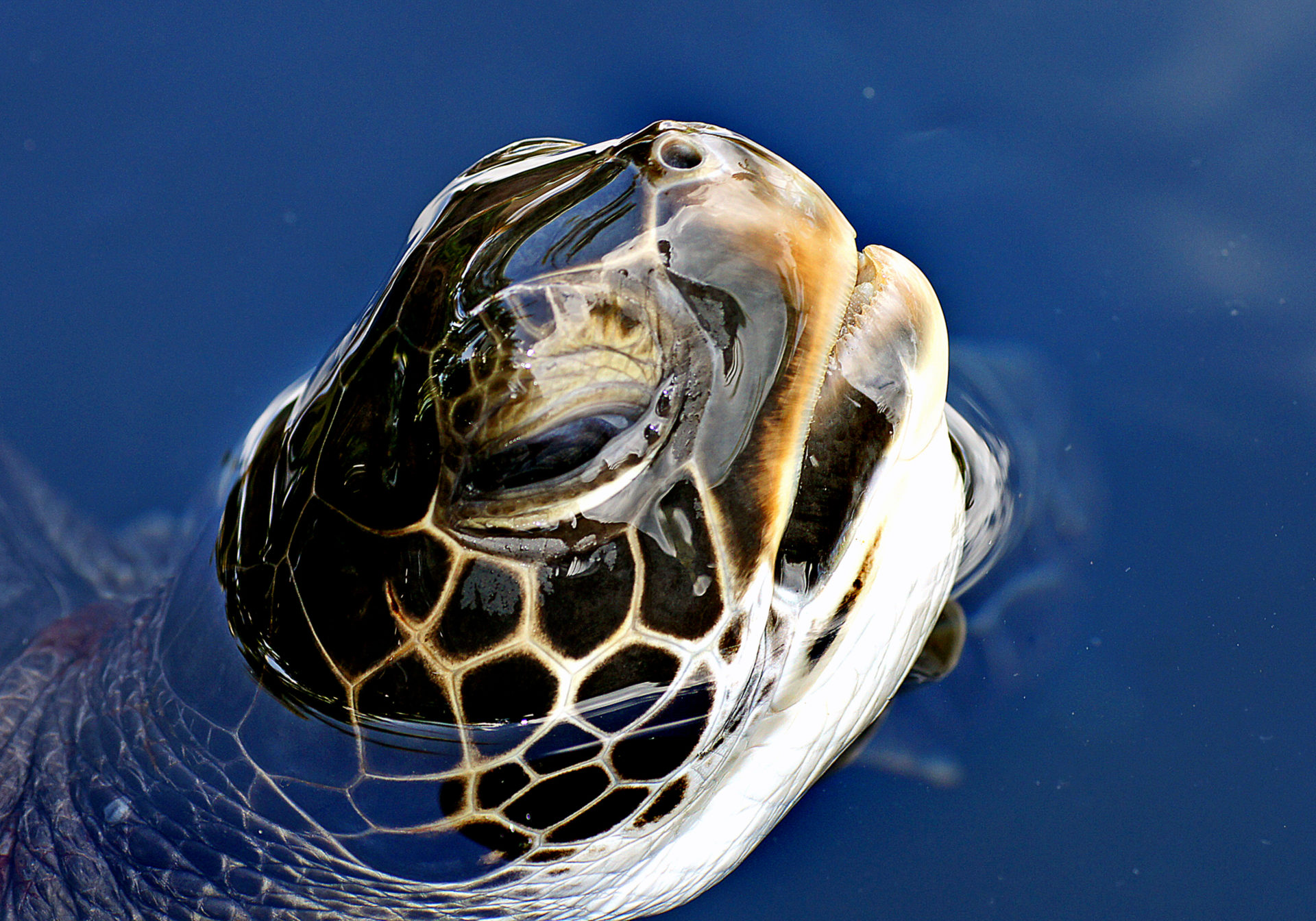 Now, let’s look at this sea turtle, mugging for the camera. The eyes, the brow-like upper eyelids, the undershot lower jaw, almost hidden under the beak, the lower eyelid… All these characteristics exist in the enhanced still from the Liimatta footage. In fact, the skin color is probably close. 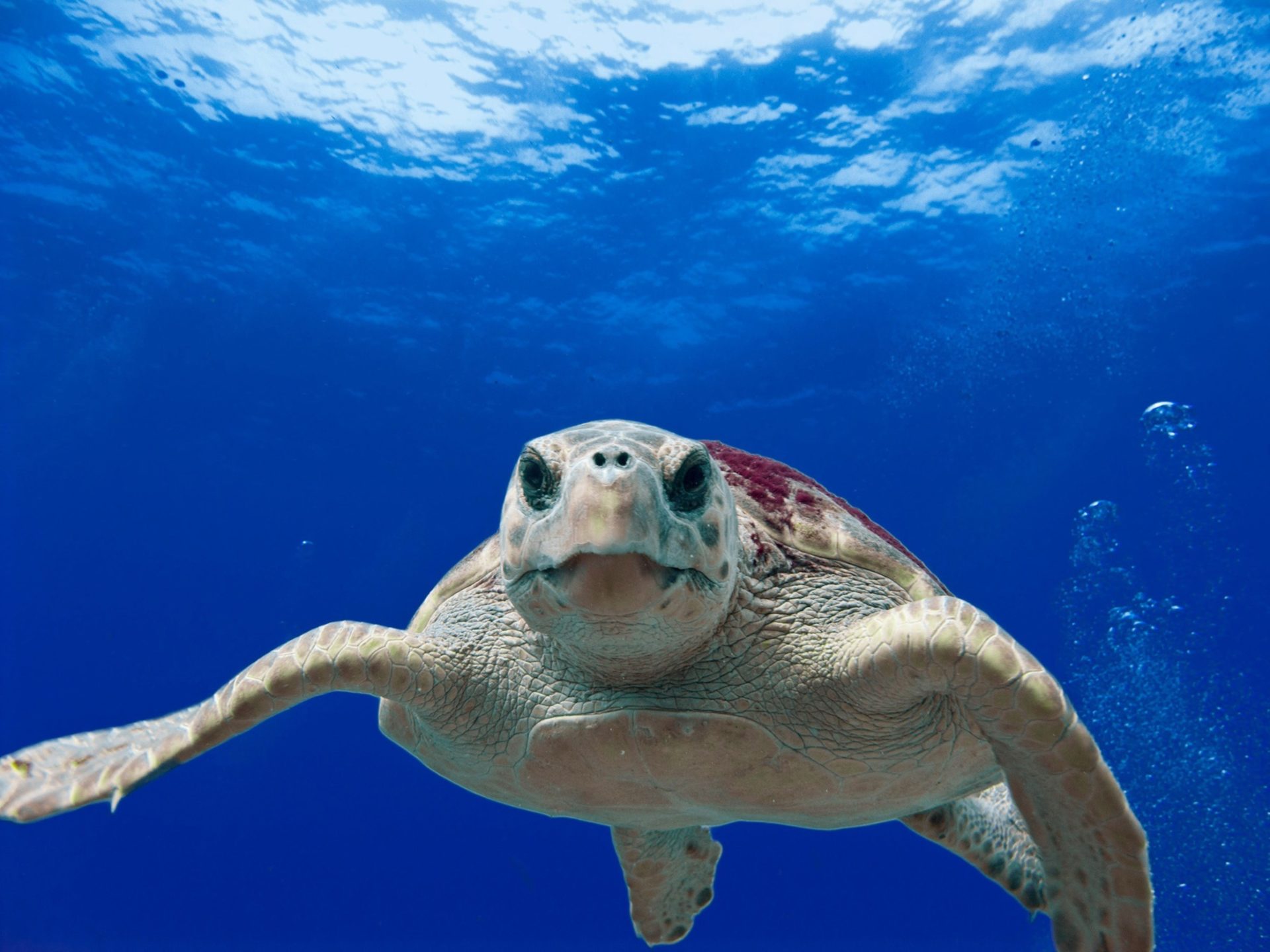 As part of my research, I also took the liberty of watching the video yet again, but with this new information in mind, and also using an HD setting on my computer. The shape of the animal’s face popped right out at me. Moreover, if you study the footage, especially enhanced, you can see that 1- it is definitely a living animal. Although moved by the current/waves, it is able to hold position using its flippers. 2- it has a longer neck than a normal sea turtle and is able to do what cetologists call “spyhopping” – using its flippers to keep its head above water as it looks around.

Based on this newfound knowledge, I decided to do a sketch of Garry’s creature, based on his account, sketch, footage, and my enhanced stills. He said it was 38 feet long, had an 8-foot neck (I assume that meant head and neck, as both are visible) large front flippers, no shell, and based on the “blotchy white and gray” description, must have had skin similar to that of a leatherback, albeit a light-colored one. With divers added for scale, this is what I came up with: 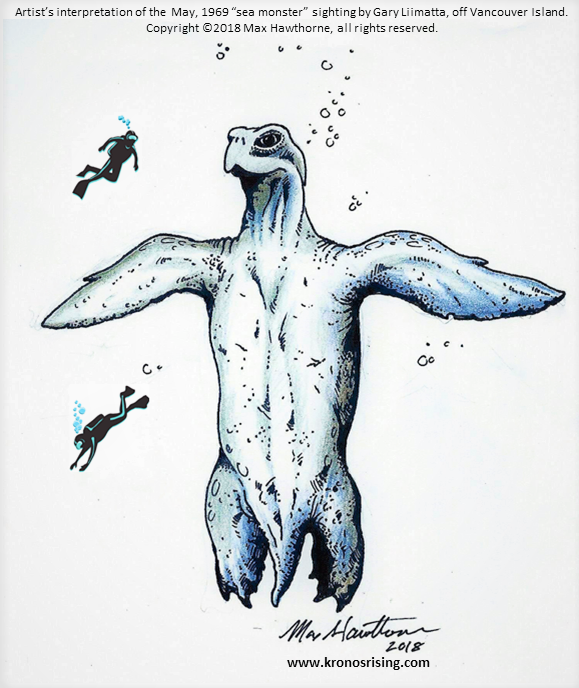 Now, lest anyone roll their eyes or claim that such an animal is impossible, keep in mind that new marine animals are discovered all the time, including whales, and that sightings of giant turtles go back centuries.

I also took the liberty of adding in a cropped portion of the enhanced film image onto my drawing for direct comparison. The insert plainly shows that the features from the film match the drawing; the eyes, beak, throat – everything fits. 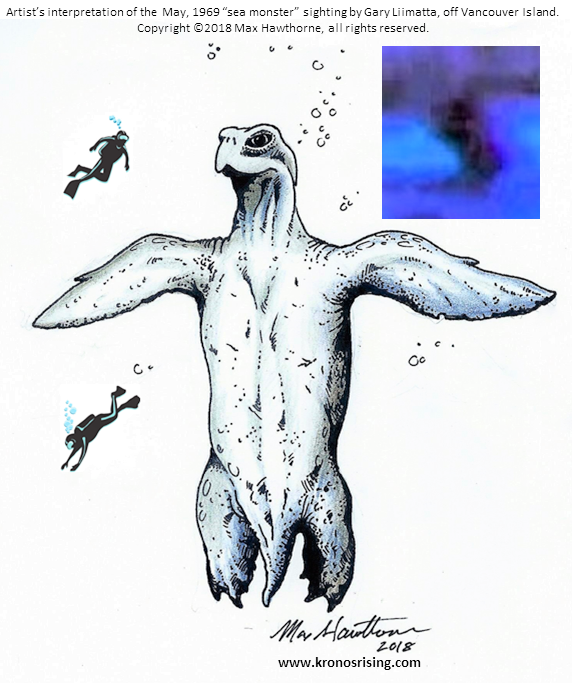 Conclusion? Garry most likely stumbled upon a giant relative of today’s leatherback sea turtle. He described it as fast moving – leatherbacks have been clocked at 22 mph and they can dive to incredible depths (over 1,000 meters) http://scienceblogs.com/deepseanews/2008/08/08/why-do-leatherback-turtles-div/. How big would it be? Well, at 38 feet in length, but slimming it down as described, I calculate the animal would be at least 15 tons, and more likely somewhere in the 20-25-ton range. In terms of diet, it would probably be an omnivore, feeding on marine plants, cephalopods (mainly squid, possibly even giant squid), and jellyfish. Some jellyfish get enormous; the Lion’s Mane jellyfish, for example, can grow to over 120 feet in length. It would make sense for something to evolve to prey on them.

So, there you have it, readers. Based on the enhancement of stills from the film footage (and watching the HD enhanced footage) I am convinced that the odds are that fisherman Garry Liimatta had the good fortune to observe and film an unknown chelonian – quite possible the biggest species of all time. If so, said creature is a very large and (for its size) fast moving animal, one undoubtedly able to defend itself from large marine predators like sharks and Orcas (leatherbacks are known to aggressively attack sharks that attempt to prey on them). It would also most likely be, like its smaller (presumed) relative, the leatherback, an endothermic (warm-blooded) marine reptile. This would enable it to roam and hunt in cold water, including the extreme deep.

Thanks very much, and I hope you enjoy the broadcast and the new novel. 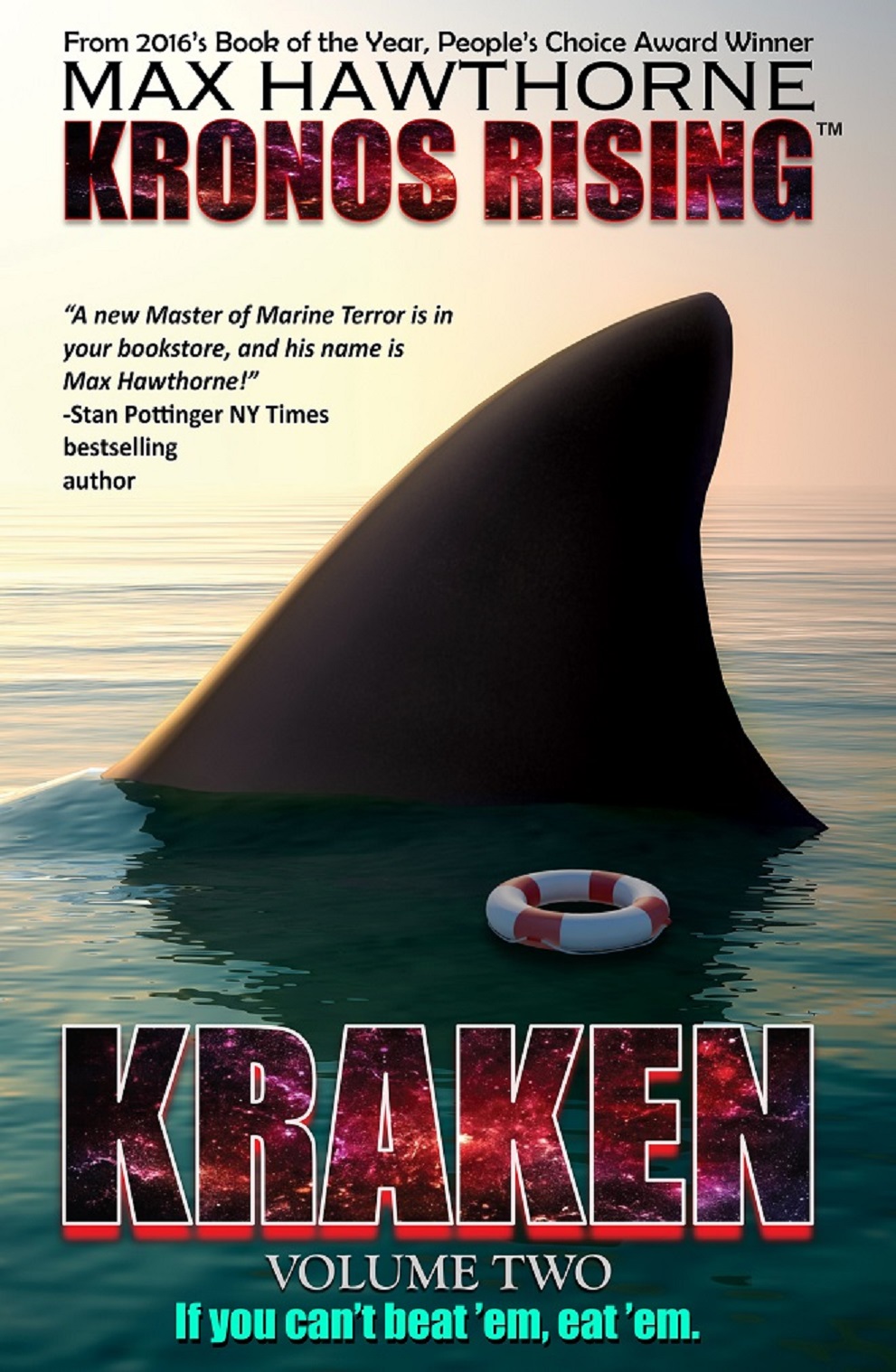