If you’re a regular to the ‪Kronos Rising‬ Novel Series Facebook fan page, you know I’m a firm believer that there are numerous large, undocumented sea creatures inhabiting the world’s oceans. Whether they’re thought-to-be-extinct examples of already known species that have, for whatever reason, disappeared from the fossil record (Lazarus taxon) or new ones altogether remains to be seen. One supposed sea monster, however, I am firmly convinced is an example of simple misidentification. That would be “Trunko,” a large animal that was seen battling Orcas off the coast of SA in 1924, and whose body washed ashore and was examined 10 days later. 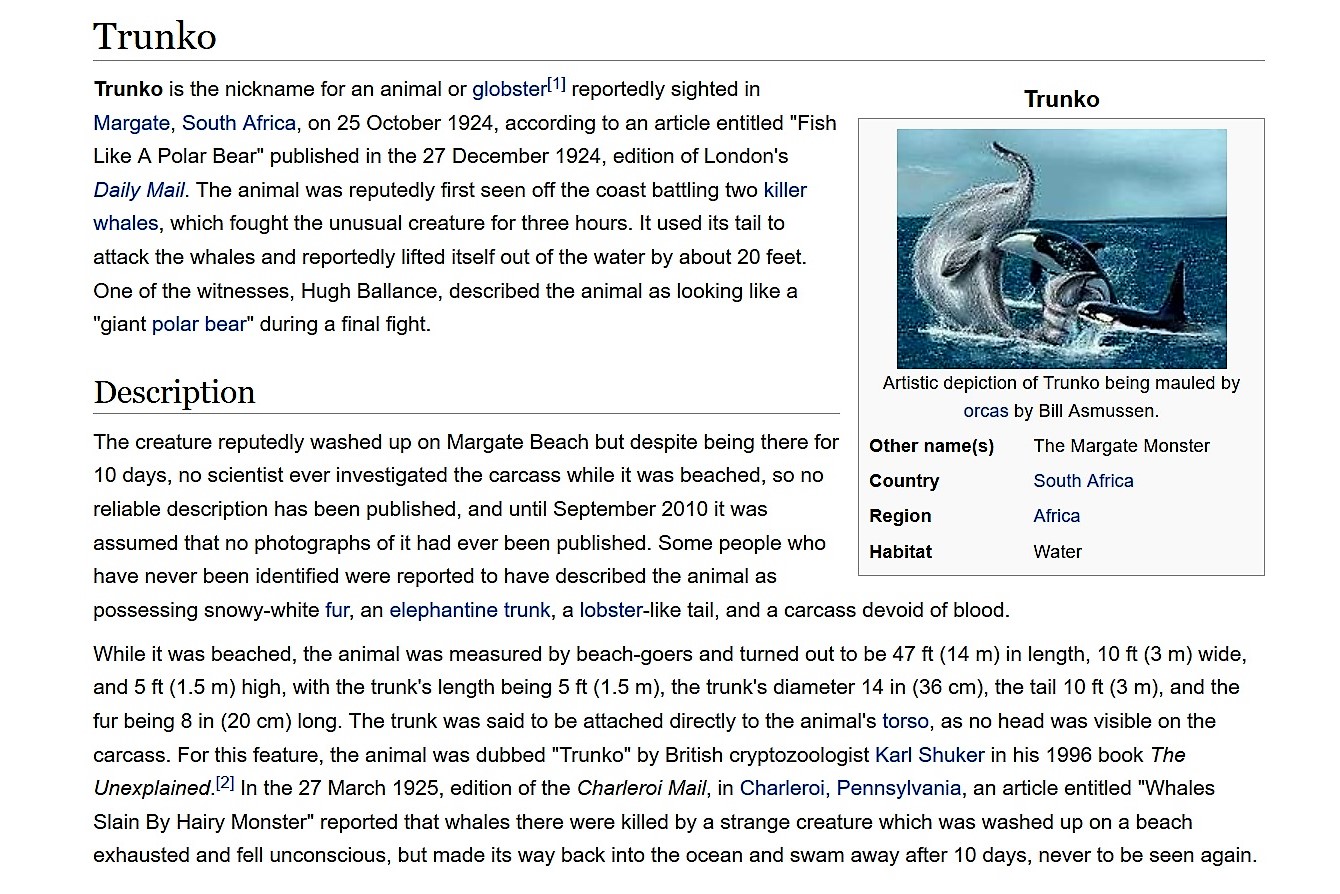 IMHO ‪Trunko‬ was NOT a sea monster. It was a male whale of some kind – probably a right whale – possibly even a white one. It’s a known fact that whale carcasses often turn white as they rot and the skin comes off, but that is irrelevant in this case. Witnesses who described Trunko as being white “like a polar bear” watched as the creature actively fought a pair of killer whales. White and partly-white right whales, though rare, do happen. Moreover, a white whale would make an inviting target for Orcas, as it would stand invitingly out in the first place and be easier to track when it attempted to flee.

In terms of the creature’s supposed “trunk”, I believe this was simply the bull whale’s exposed organ. My theory on this is supported by the reported examination of the carcass, which stated that the tapering trunk was attached directly to the torso of the animal. (for details, see: Trunko Wikipedia Full Article).

Furthermore, I disagree with any claims that the “monster” was actually a globster (a large, gelatinous mass of rotting whale blubber that separated from the carcass). First off, Orcas aren’t going to play with a foul-smelling, multi-ton glob of putrescence for three hours (the length of the documented battle). If they had such tendencies, we’d see them appropriating drifting whale remains from great whites. We don’t. In addition, the fight was witnessed, and over the course of the battle “Trunko” repeatedly used its “lobster-like” tail (i.e. flukes) to fight the killer whales. Lengthy battles between Orcas and larger cetaceans are well documented and often last hours as they wear down and exhaust their quarry. Moreover, baleen whales and even sperm whales commonly use their tails as a defense against killer whales. These facts indicate that Trunko was a living creature, not a drifting mass of rotting blubber.

Assertions that the creature’s “trunk” was simply a rib or some other loose piece of bone are, in my opinion, illogical. Loose ribs don’t stay attached to slabs of decaying fat, especially when slammed repeatedly and tossed twenty feet in the air by killer whales (again, for 3 hours). Witnesses saw the trunk and even measured it. I am sure they would know a curved, protruding piece of bone if they saw one. Instead, it was described as “elephantine”. This was undoubtedly the unfortunate whale’s exposed penis. Male whales often expose their organs when around females, sometimes in groups, and their huge genitalia (up to 15 feet in the case of blue whales) have reportedly been mistaken for everything from sea serpents to giant squid battling the same whale. If that’s not enough, if you look at this head-on picture that was taken of Trunko’s carcass, it bears a remarkable similarity to that of a beached right whale, especially when viewed head-on. 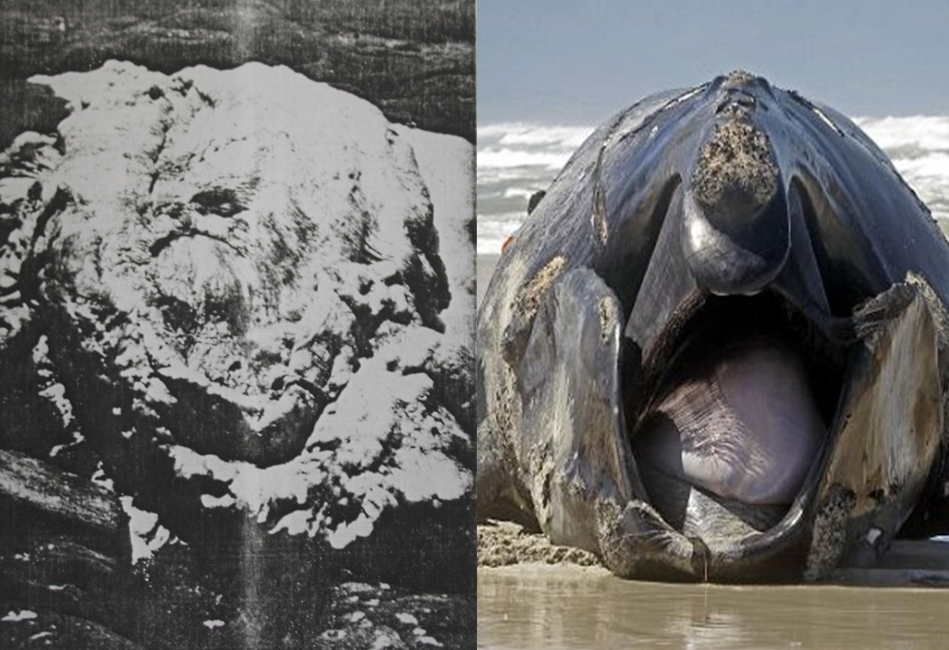 There is no doubt; based on witness description, behavior, measurements, description of the body shape, tail width, and elephantine “trunk” protruding from the carcass, Trunko was not a globster in any way, shape, form or fashion. It was simply a baleen whale that fought and lost a ferocious battle against a tenacious pair of killer whales and washed ashore ten days later as a decomposing mass.

I love my sea monsters, but this ain’t one of them. Let it never let it be said I take an unrealistic approach to things.

**NOTE: Per a message I received from Dr. Karl Shuker on 3/12/2020, he does not and has never believed that Trunko was a whale carcass and asserts that it was, in his opinion, a globster. Any assertion that he had changed his opinion, as previously stated by cryptozoologist Scott Mardis on Monster-X Radio, is erroneous. Dr. Shuker stands by his original opinion that the remains found were a globster. I appreciate him taking the time to clarify his position. 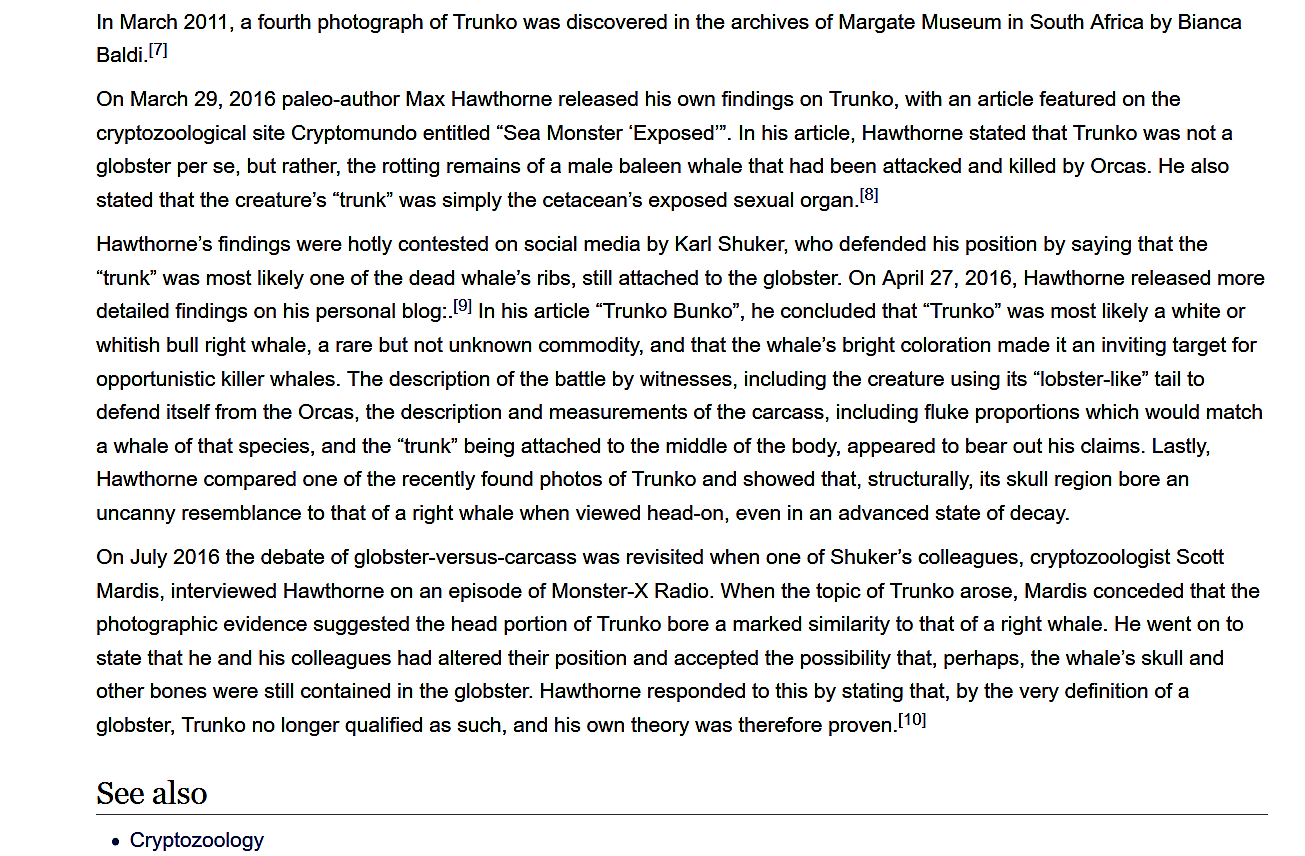