I’m a big supporter of paleo-art. Heck, I’ve got a free gallery on my site to help promote paleo-artists. But these “scientifically accurate” pliosaur silhouettes I keep seeing making the rounds have gotten to the point that they need to be addressed.

The one below is a prime example (top portion). The artist Eotyrannus5 is talented, but his renditions are grossly inaccurate. Heads are shaped wrong, bodies are too small (come on, were they REALLY half head and neck?) and eel-like, flippers are disproportionate, and who the HECK came up with the idea of hoisting the posterior paddles up like a shark’s dorsal fin? You’d have to break the animal’s bones for that to happen. On top of that, they all have a “chicken butt” and almost no tail, to boot. 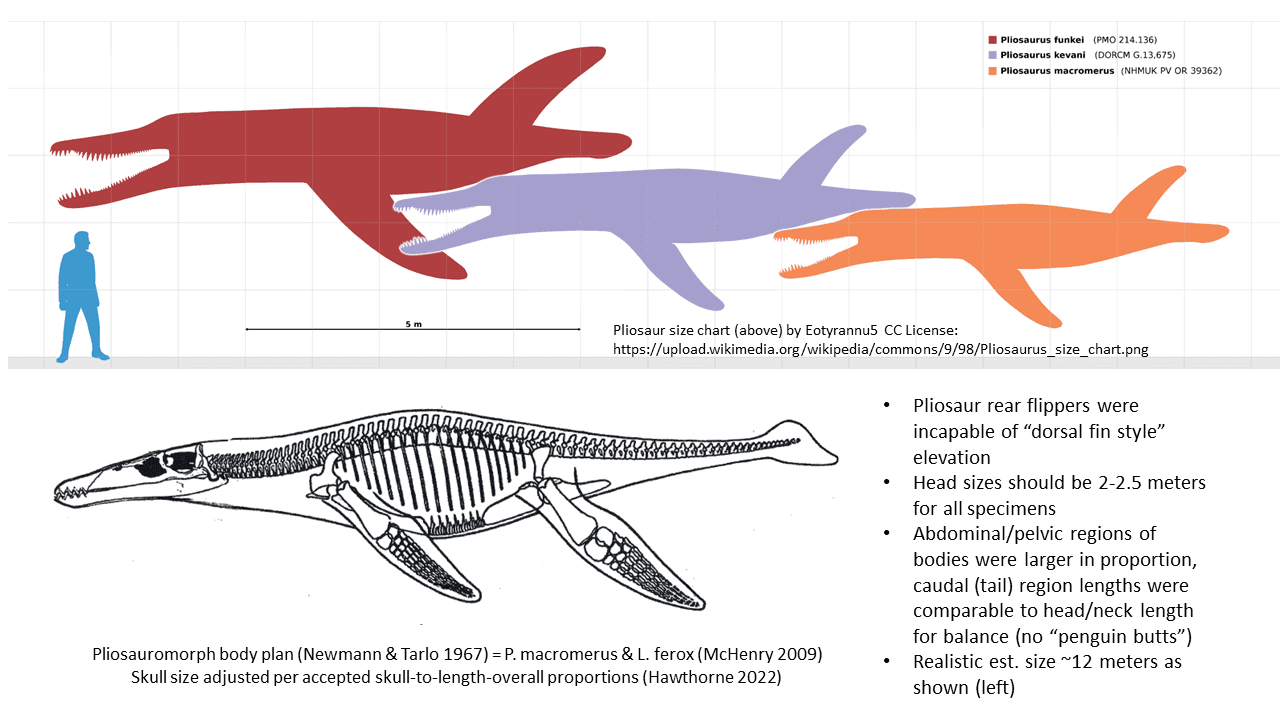 Then there’s the matter of size. Let’s take the pliosaur on the left, formerly known as “Predator X” and now, Pliosaurus funkei. There are two specimens, with PMO 214.136 represented. Both specimens are listed as being from 9-13 meters in length, but the head size for 136 (2-2.5 meters) is listed as being 25% larger (1:5 head-body ratios apply), and it is stated as being significantly larger overall as well. It is obviously occupying the upper end of that 9-13 meter range, i.e. 12-13 meters. Meanwhile, the artwork shows it as being 8.5 meters. Why? Did the artist accidentally cut the rear ends off all his pliosaurs? Is someone trying to intentionally shrink the public’s perception of them? I’m confused.

At any rate, I added a 12-meter, much more scientifically accurate pliosaur skeletal/outline below in an attempt to correct things. I adjusted skull size to reflect the current schools of thought. Both P. funkei and P. macromerus were arguably in this range, and if the P. kevani holotype does have a 2.4 meter skull (as I’ve seen Dr. Steve Etches state, although he could’ve meant the entire head), then it was definitely a 12-meter animal.

Note: these creatures are all known from very few specimens. Some just one or two examples (e.g. a head). The odds of there having been adults that were 30% bigger (if not more) are high. In fact, Steve Etches has publicly stated that the museums have tooth sockets and broken off teeth that dwarf P. kevani’s largest alveoli.

“Here, there be dragons”.
Max Hawthorne