MEGALODON BITE, THE SECRET BEHIND IT [REVEALED]

Carcharodon megalodon was the largest carnivorous fish known to man, and had the biggest, baddest bite of any known shark. It was a macropredatory mackerel shark that roamed Earth’s oceans from the early Miocene to the end of the Pliocene (approx. 23-2.6 mya). It was, along with the raptorial sperm whale Livyatan melvillei, the dominant predator of its time. The Megalodon bite is calculated as being one of the most powerful bite forces in history. But why was that bite so powerful? 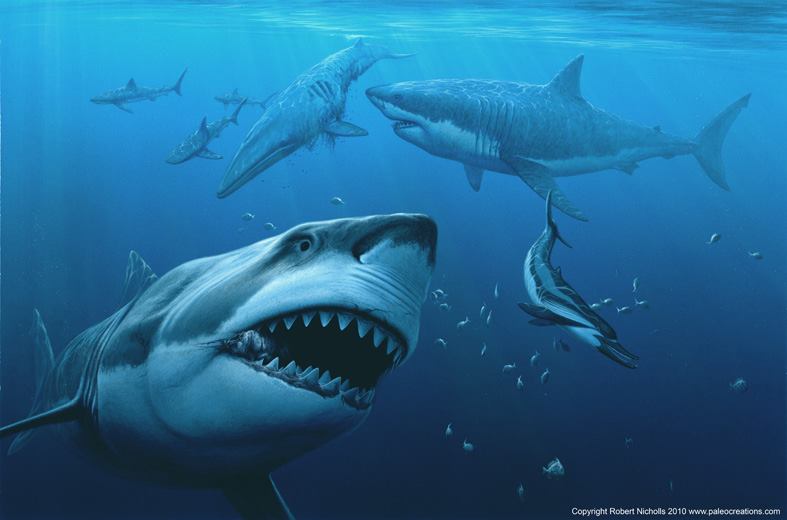 If you’re a follower of my blog,

and, of course, my Kronos Rising novel series, you know that I’ve done pieces on pliosaurs, elasmosaurs, and an assortment of other marine predators. I’ve also investigated a theory of mine, a controversial aspect of Megalodon that some people find hard to believe; as an adult, it was primarily a scavenger. Megalodon: Earth’s Mightiest…Scavenger?

This is evidenced by studying the shark’s teeth, which change from birth to adulthood, morphing from serrated steak knives to hacksaw-edged chisels, as this comparison between a young Megalodon and a comparably-sized great white’s teeth show.

If you scale up the great white shark’s tooth to the same size as a large (6.5”) adult Megalodon tooth size, the morphological adaptations of the larger animal become apparent. The teeth were no longer designed to slash and bleed out prey, something a white shark can do against even elephant seals its size. Instead, the teeth of the adult mega-toothed sharks became bone crushers used to break open the rib cages of whale carcasses, even already stripped ones, and get at the internal organs that remained.

I suspect, with Livyatan having been a whale killer in its own right, that Megalodon would scavenge the remains of its kills, as great whites do with the remains of Orca kills today. In fact, the extinction of Livyatan may have contributed in some small part to the great shark’s extinction (reduced carcasses to feed on), but that is an investigation for another time.

Megalodon Bite: The real secret behind the Megalodon’s tooth design

I’ve been sitting on for years – also confirms its role as an eater of carrion. Again, this is for the large, cumbersome adults that were too slow to catch nimble, faster whales, not the 25-foot adolescent sharks which were, undoubtedly, still lethal hunters. Also, to be clear: even an adult Megalodon was not entirely a scavenger. It may have gotten most of its calories that way, but woe to any wounded or sleeping whale, sirenid, or sea turtle that could not get out of its way in time. Opportunism always wins out.

As one can see, Megalodon’s teeth are thick, heavily reinforced, with tiny – but very sharp – serrations. They also had something else a great white’s teeth don’t – a well-developed chevron/bourlette on both the lingual (inner/display side) and labial (outer) face of the tooth.

This was undoubtedly an additional anchorage point, to help stabilize the teeth in the jaws as extreme force was applied. We see the chevron gradually becoming more and more pronounced over the course of the shark’s ancestry, until it is almost as developed in that other notorious whale-eater, C. chubutensis. These teeth were, as I’ve previously established, specialized rib-cage-crushers, but they were also something I’ve never disclosed publicly before. They were also uniquely-designed wedges – the maxillary teeth in particular. 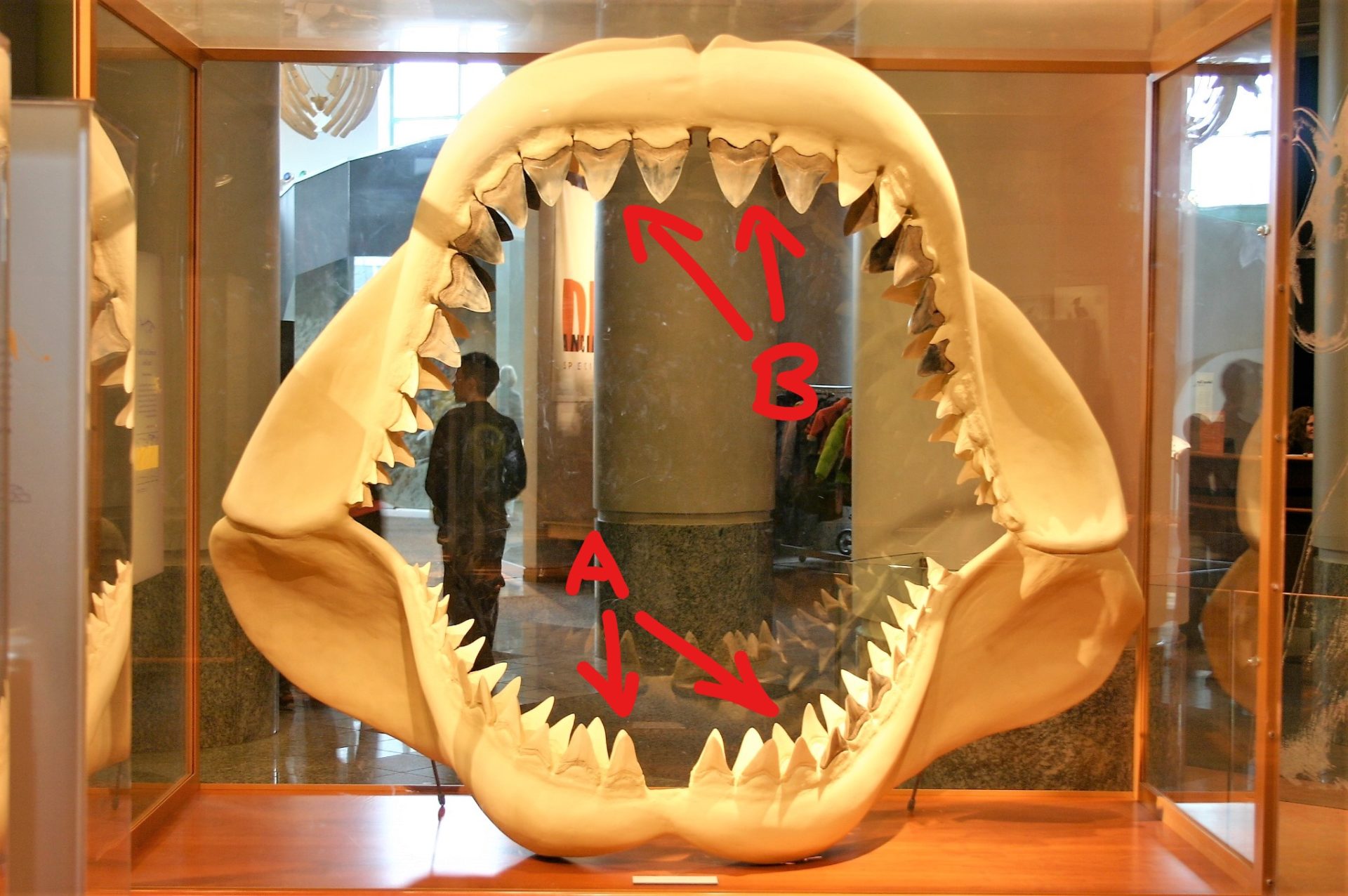 A Megalodon bite was deadly, as the teeth of Megalodon were designed to split ribs apart during feeding – especially the maxillary (upper jaw) teeth. As can be seen in this sculpture (by talented paleo-artist Alberto Gennari), the basic tooth design is similar to that of the extant great white white shark. And, the basic bite technique was also similar to that of Carcharodon carcharias. The shark would impact on its prey – or carcass, in this case – and the lower jaw, with its triangular, spike-like mandibular teeth (see Megalodon jaws above, ref: A) would dig into the flesh, effectively pinning it. Then, the lips would peel back and the upper jaw would extend up and outward, coming down like a slow-moving guillotine.

During the Megalodon bite, its maxillary teeth (see jaws above, ref: B) would slip between the ribs of the carcass it was attacking, and then the main Megalodon bite force would be applied. The tips of the shark’s teeth are often much narrower than normal proportions dictated than the remainder of the crown, creating a serrated wedge that, as it was forced deeper down, pushed outward against the ribs on either side. With teeth on both sides of a given rib (pinning it), not to mention the flange-like cusp edges toward the bottom of each Megalodon tooth’s crown, the teeth applied a tremendous amount of compression, both downward and outward, to each affected rib.

Next, is where those tiny serrations come in. With all that pressure pushing down and then outward against each of the whale’s ribs, the serrations start to slice in. They begin to cut into the rib bone from both sides, squeezing it in a vice, slicing deeper and deeper, cutting further and further in until – CRACK! The ribs shatter and split apart, just like if you or I were cutting pork ribs. A comparable tool for this is a serrated log splitter. It does to a log, vertically, the same thing a Megalodon tooth does horizontally to a whale’s rib.

This is how an adult Megalodon got at the internal organs of drifting carcasses. It was able to bite through the rib cage and devour the heart, lungs . . . anything Livyatan, or smaller Megalodons and other sharks missed. It was able to do so with less bite force than imagined, and quite effectively. This illustration shows in detail how the individual teeth were adapted as the ultimate bone chisels.

Keep in mind, this also weighs in on the whole adult Megalodon scavenger debate. Besides the fact that the animal as an adult was a rather slow swimmer (an engineer I spoke to recently estimated cruising speed of 3-8 mph, with 12 mph a likely maximum – more on that study to come), it had huge calorie requirements. Unable to catch large whales, appropriating carcasses from others was an easy way to make a living. Teeth that were designed to fit between ribs and apply graduated pressure do not indicate an active hunter, however. Whales didn’t just lie there and say, “Okay, I’ll just let you bite into my side and fit your teeth between my ribs like a jigsaw puzzle and then, when you’re ready, you can bite me with all your strength.” No. These teeth were superbly designed to do what they did, but they would be most effective against an immobile and non-resisting target. If the shark were going to kill its victim outright, like the great white does, (and have access to the blubber and flesh not within the rib cage) there would be no need for such teeth. They existed as the means to get at the remaining carrion smaller, weaker scavengers could not.

Interestingly enough, a recent study also states that the steady increase in the size of whales, and the loss of the smaller cetaceans it preferred to feed on, contributed to Megalodon’s demise. Megalodon doomed by taste for dwarf whales

This makes sense as, as deadly as the Megalogon bite was, the spacing between Megalodon’s teeth would not have worked as effectively on the rib cages of extant great whales, (which were coming into their own during the tail end of its reign), but rather, on those of the small and medium-sized prey items it preferred. This inability, or at least difficulty, to chew through the rib cages of whales as big or even larger than it may have pigeon-holed the giant shark. With fewer smaller whales to kill and scavenge, its numbers would have reduced over time, until the inevitable occurred.

Special thanks to Bob Nicholls for the use of his painting, “Megatooth Rising”.