PLESIOSAUR NECKS – WHY SO LONG – Part 2: Testing the Theory

A previous post of mine (and its accompanying press release), unveiled my theory on long-necked plesiosaurs. In it, I concluded that plesiosaurs in general, and elasmosaurs in particular, evolved long necks as part of an evolutionary arms race. It is an adaptation that allowed them to effectively minimize the pressure waves generated by both their bodies and their flippers – especially the front pair – thereby bypassing the sensitive lateral lines of the fish they preyed on. The marine reptile was able to swim up behind a school of fish and, with its head being similar in size to the fish in the school, it could “graze” to its heart’s content. When it was ready to feed, it could either accelerate with a hard push from all four of its flippers or, perhaps in conjunction, form its neck into a slight horizontal “S”, lunging forward and seizing its prey. Dropping back with its kill, it then swallowed it while continuing to pace the school, then moved back into position for its next bite. (see: Plesiosaur Necks – Why so Long?)

Of course, the proof is, as they say, in the pudding. And any paleo-theory, no matter how sound, is always going to attract its share of detractors, for whatever reason. So, how do we prove my theory? How do we show that, when approached from behind (where their eyes are of no use) by an object of non-threatening size, i.e. the head of an Elasmosaurus, fish weren’t alarmed and could be seized? And, as further proof, how can we prove that the opposite holds true as well: that when a significantly larger object approached them in a similar manner, the fish, alerted to danger by their lateral line, took evasive action? I see three options:

Option 1- Time travel with a good underwater camera. Not an option.

Option 2- Recreate a similar scenario and film it. Possible, but expensive and time consuming, and my readers want the next book in the Kronos Rising series soon . . . as in yesterday.

Option 3- We find an extant animal that preys on fish in a similar manner and see if we can find footage that supports my theory.

We’re going to use Australian’s aquatic Snake Neck turtles as stand-ins for our long-necked plesiosaurs. The first clip we’re going to study is below. The action takes place in the first few seconds, so watch closely.  The turtle, spotting a tasty goldfish in its tank, charges right at it. The fish both sees and senses its predator approaching, and easily dodges the comparatively huge turtle. It’s safe, but not for long. The turtle turns and, seeing the goldfish with its back turned, moves toward it using only its head and neck. With the turtle’s head being not significantly larger than the fish, its lateral line doesn’t set off a slew of alarm bells and the fish is easily captured. This is very similar to what one would see when plesiosaurs fed on schools of fish. The backend of the school is most vulnerable and, one by one they are snatched by the pursuing marine reptile until it’s had its fill.

Now, let’s go the opposite route, and see if our long-necked turtles can prove that a fish (or school of fish) being pursued by larger objects from the back alarms them by setting off their lateral line. In the video below, we see a Snake Neck turtle attacking a group of tetras that are far smaller than the goldfish was. In fact, they’re tiny by comparison. At around the 15 second mark, the turtle sees the tetras and moves to attack. They spot it and turn to flee, but even with their backs turned still respond to the turtle’s approach and take evasive action. This is because the turtle’s head is so big compared to the fish that, in the open sea, it would be comparable to a bull shark charging a menhaden. The fish can physically feel the attacking predator with their lateral line and flee.

This proves beyond a reasonable doubt that my theory on long-necks and lateral lines is legitimate. Long-necked plesiosaurs used their necks to cherry pick fish from schools and, thus, did not have to do active, high-speed pursuits, chasing scattering fish in every possible direction. This would’ve been difficult – taking hairpin turns with all those cervical vertebrae – not to mention a huge expenditure of energy to capture a single fish that hardly constituted a meal. No. Numbers was the name of the game for these toothy piscivores, and they would feed voraciously on a school until their bellies were full.

Thanks very much for stopping by. I hope you enjoyed this follow-up. If you haven’t seen the rest of the site, please take a moment to visit the Paleo Gallery, which features artwork from some of the field’s top artists. And, of course, if you’re a reader, make sure you check out the Books page and Free Books page for the latest releases in the Kronos Rising series.

(special thanks to Charles Pogan for providing the YouTube videos of the turtles in action, and to Scott Mardis for recommending Charles and his turtles) 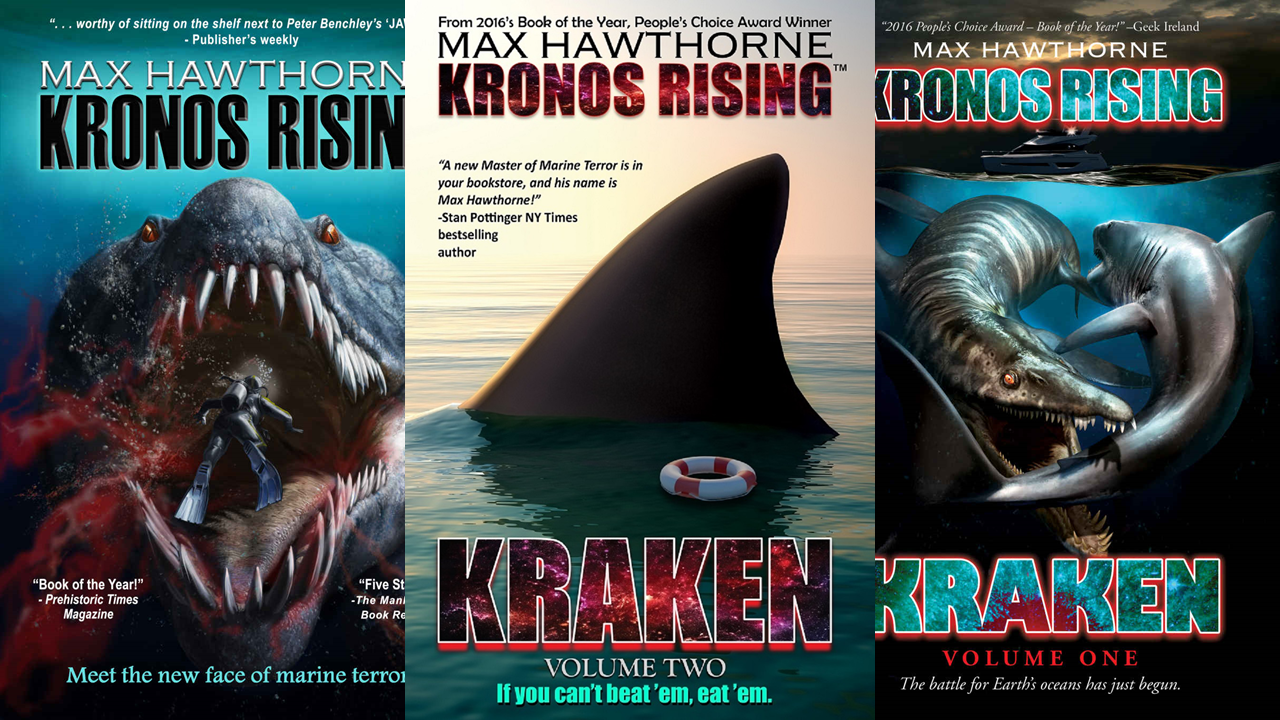