Kronos Rising was my first novel and was originally written in 2004, over a period of nine months (technically twelve, as I took a three-month hiatus to deal with some stuff). They say nobody’s first novel ever turns out really well, and that may well be the case. Once it was “completed” KR went through a lot of revisions. In fact, there were several occasions where it underwent major rewrites, as I received valuable insights from talented people like my friend Chris Parker, screenwriter extraordinaire, and David Goodman, the former executive producer of The Family Guy.

Even with all of that, as KR approached market-ready status there were still a few issues. First, the manuscript was enormous – a good 200,000 words – and second, there were a few plot points that needed to be tied together. The only way to accomplish this without making the book even bigger was to start “trimming the fat”. In literary terms, that means deleting unnecessary scenes – for writers the mental/emotional equivalent of chopping off the odd finger and toe.

Still, it had to be done, and as a result the finished product did, indeed, shine.

Below, you will find the second scene slated for deletion. It was interesting to write and involved the original pliosaur coming ashore – ostensibly to lay eggs. Although that fact wasn’t shown or spelled out, anyone with a head on their shoulders would have realized what I was up to. Worse, if the scene had been kept it would have sabotaged the epilogue scene at the end of the story (if you haven’t read KR yet get out now before more spoilers hit) where eighty ravenous baby pliosaurs hatch and make their way down to the surf, with obvious potential consequences, both for the oceans and humanity.

The epilogue was vital, as it set the stage for the rest of the series. That said, the offending scene was cut without further ado.

I would also point out two items of note that savvy readers might pick up on – especially, those with an interest in paleontology. The first is the alternating swim stroke that I had the Kronosaurus imperator cow use while swimming. Back in 2004, this was a popular theory among paleontologists. Since then, it has more or less fallen out of favor, as additional studies (including my formal paper on plesiosaur locomotion) show the flippers moved differently.

The second item is the notion that plesiosaurs laid eggs. Although it may have been possible for small or even medium-sized pliosaurs (Orca size or smaller) to come ashore(perhaps to sun or escape larger predators), the notion that a Thalassophonean the size of a large sperm whale had to drag itself out of the water to lay eggs was a bit far-fetched. Especially in light of the most current paleo-data, which shows that plesiosaurs gave birth to live young. Still, this is how the book was originally written, and the whole egg-laying-scenario worked nicely for the overall plot lines, and thus was kept.

Besides, in the Kronos Rising universe, at least some plesiosaurs do lay eggs. So, that’s my story and I’m sticking to it. And now, without further ado, I give you the deleted scene you’ve been waiting for. I hope you enjoy it.

Gliding silently through the darkness, the Kronosaurus paddled its way toward the nearby island. Though the deserted strip of land it had chosen was little more than a twenty-five-acre parcel of sand and palm trees, still, it was suitable for its purpose.

The creature’s movements appeared cumbersome, yet despite its growing fatigue, the last leg of its near-sixty-mile journey had been a rapid one. A master of sustained sub-aqueous flight, it had covered almost forty miles of ocean in the last hour.

To conserve energy during such long-distance travels, the pliosaur had incorporated what paleontologists referred to as an asymmetric power stroke. Its front and rear flippers worked alternately, allowing it to generate continuous motion with only intermittent effort. For bursts of speed, however, such as when charging a rival or closing on prey, it used all four of its flippers simultaneously, propelling itself through the water like a giant sea lion, albeit with twice the number of propulsion units.

After scanning the temperate seas ahead of it with its myriad senses, the scaly titan slowed its forward momentum, before breaching the surface with a loud blast of water vapor. Its glimmering eyes blinked as they focused on its pending destination and it began to cruise quietly on the lagoon’s surface. Beneath its monstrous body, it could feel the tepid waters growing shallower by the minute.

For the last twenty minutes, the marine reptile had been uncharacteristically cautious, traveling beneath the ocean’s surface without spouting once. It had been a simple task. Evolution had designed it for deep-water hunts, during which it often swam to depths that exceeded five thousand feet, remaining submerged for up to two hours.

Now, however, there was no need.

Pausing out of instinctive caution, as its pale belly began to rub against the lagoon’s sandy bottom, the pliosaur studied the nearby shore. Other than the high-pitched cries of a pair of night birds and the squeaks of a few bats, flitting about as they fed on tropical insects, there were no signs of life.

None it could detect, at least.

The moments ticked by, with the coming sunrise still hours away. Still, the creature remained where it was, digging the hardened tips of its paddle-shaped appendages into the soft bottom to offset the heaving of the waves. Eventually, it felt the swells of the incoming tide grow stronger and begin to push insistently against it. Only then did it give in to its need. With a low rumble it began to move purposefully toward the beach, displacing hundreds of tons of sand and silt as it paddled its way into the shallows.

It was coming ashore.

With all four of its powerful flippers struggling to haul its enormous bulk up and out of the pounding surf, the colossus of the deep lumbered forward with interminable slowness. Even with the tide’s powerful surges aiding it in its efforts, its one-hundred-ton body weighed down on it. A thing of lethal grace while submerged, the Kronosaurus moved on dry land with agonizing slowness, its every movement a desperate struggle against the crushing forces of gravity.

In the midst of hauling itself across the moonlit sand, the creature unexpectedly paused and raised its enormous head. Peering about, it inhaled sharply, then uttered a grating hiss that echoed across the beach. It was a warning, one designed to scare away potential threats.

There were none, however. Just the warm night breeze and the chittering of insects.

Thirty minutes later, the creature had succeeded in dragging itself fifty yards up the beach. It paused again, this time to rest. Exhausted from its efforts, the marine reptile’s breathing came in labored wheezes, like those of a beached whale. Unlike the huge mammals that had evolved in its kind’s absence, however, the pliosaur’s physiology allowed it to withstand the tremendous strain of its travails. Its arched vertebral column and dense gastric ribs worked together to prevent its limousine-sized lungs from collapsing under its own weight, as would have happened to any cetacean its size that suffered the misfortune of finding itself stranded.

The pliosaur lay there for a time, its glittering eyes with their depthless black pupils blinking repeatedly to wipe away the annoying particles of sand. Its enormous body lay stretched along the beach, its dark skin shimmering in the moonlight like burnished steel. It raised its wedge-shaped head one last time, peering about, then lowered its battle-scarred muzzle onto the top of a nearby dune. 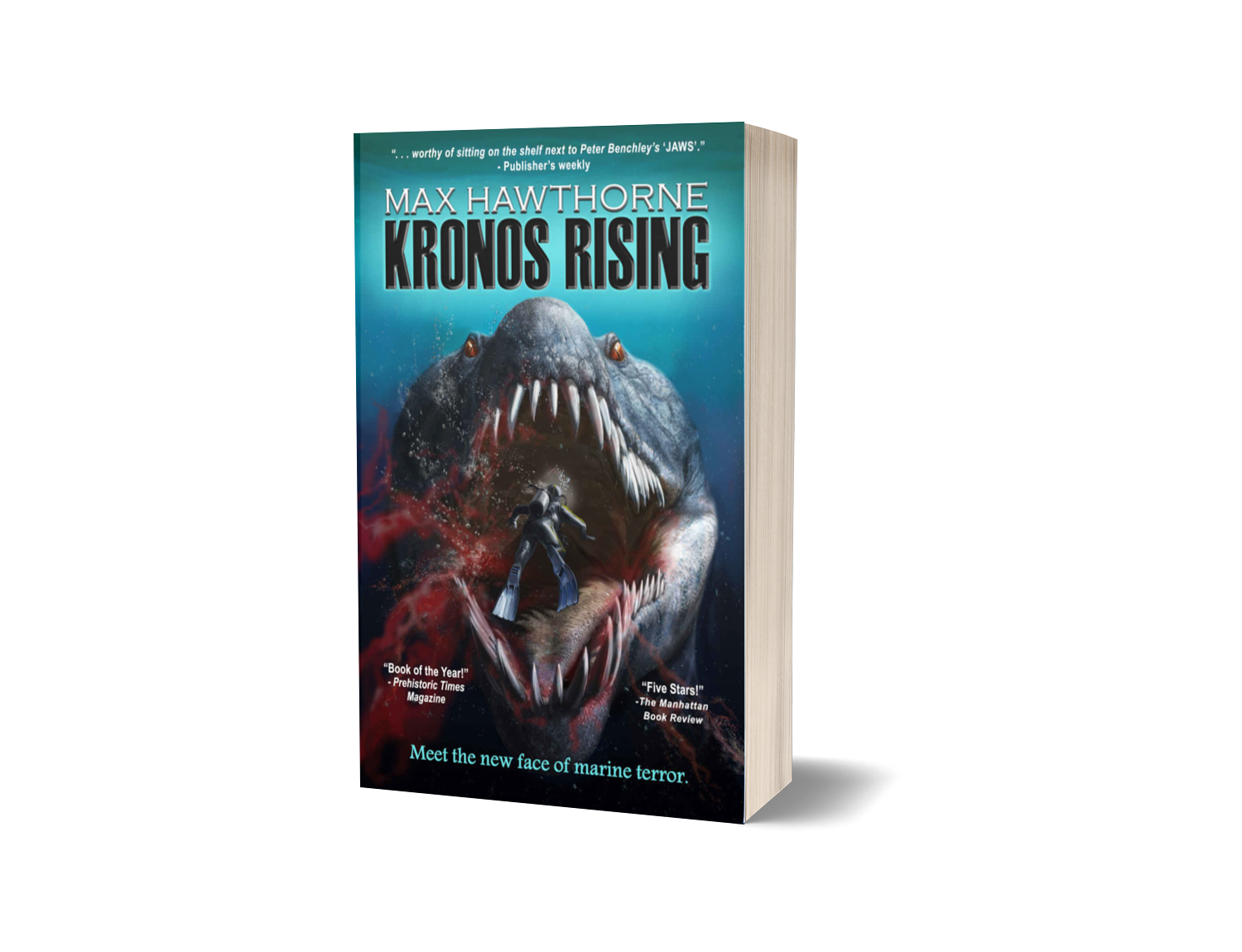