How Big Was the Monster Shark That Took This Bite?

GREAT WHITE RECEIVES BITE FROM GIANT SHARK – WAS IT A MEGA SHARK?

If you’ve read my #1 Amazon bestseller, Monsters & Marine Mysteries, you know that I’ve explored fantastic and, often, never-before-discussed sightings relating to an assortment of huge and horrifying sea creatures. It appears we now have additional photographic evidence of at least one of them. What form is this evidence? A bite mark on – of all things – a great white shark.

Back in 2019, off the coast of Guadalupe, a marine photographer by the name of Euan Rannachan took underwater photos of a great white shark that appears to provide added proof of the existence of mega-sharks. For purposes of this blog post, we are defining a mega-shark as a macropredatory shark that exceeds the accepted size norms for great whites (i.e., greater than 23 feet or 7 meters). In my book, Monsters & Marine Mysteries, I studied what I consider to be overwhelming evidence of the existence of these monsters. I am firmly convinced that they are out there and, when you see the evidence, I’m betting you will be too.

The Carcharodon carcharias in question is nicknamed Seabatch. She is, per Euan, around eleven feet in length. (Note: a UK Media outlet called “The Sun” released an article on the shark on December 30th. However, they apparently “upgraded” her size to 15 feet.) Seabatch showed up at Euan’s shark cage sporting an enormous bite mark/scar on her left flank. Before I get into an analysis of the bite mark itself, let me first address the inevitable reactions of naysayers and armchair experts who will feel obliged to chime in.

Analysis of the Bite

As the photos below show, the strike was fairly well centered, and stretched from the left pectoral fin (which must have been completely engulfed) all the way to the rear of the dorsal fin. Using a lateral view of Seabatch, and based on the shark’s stated size (per the photographer), I estimate the bite measures ~30 inches in width/diameter (76 centimeters or 0.76 meters). Height is impossible to say, but as additional photos show, the lower jaw was able to completely encompass the underside of the shark, suggesting a tremendous gape. A bite height of 42 inches (over 1 meter) would not be out of the question.

Was it From Another Shark?

White sharks mouthing or even aggressively biting others of their kind is a common occurrence. It happens during mating, as well as during territorial disputes. Smaller sharks tend to (wisely) give way to larger ones. If they fail to, a warning bite is often the result. Some attacks are far more serious than others, inflicting damage that one would think would be fatal. Luckily, sharks are hardy and heal quickly, so most non-feeding-based attacks tend to be non-fatal.

In Monsters & Marine Mysteries I analyzed a series of mega-shark bites. These were bites from real sharks, complete with tooth notches to prove it, and ranged from around twenty-four to forty-eight inches in diameter (the book contains all the details, including stats, images, and links). I christened one of the sharks in the book the Beast of Brier Island. It left fresh feeding marks on a bull humpback’s carcass that had drifted ashore on Brier Island, the largest of which (measured on video) were 27 inches wide, with one demonstrating a maximum gape (bite height) of 38 inches. Using the most conservative scientific formulas available, that suggested a shark just over 25 feet in length (think “Bruce” from Jaws). Scaled up from that, the bite mark on Seabatch therefore indicates an attacker around 28 feet in length.

Is that possible? Could there be a 28-foot macropredatory shark cruising around out there? Absolutely. The shark I called the Perth Canyon Colossus, which left its calling card on a 69-foot pygmy blue whale (photos in M&MM), may have been 30 feet in length. And the Galapagos Giant, which took a 4-foot hunk out of a 40-foot whale shark (all in Monsters & Marine Mysteries) could have been the same size as its prospective prey – as big as a bus. 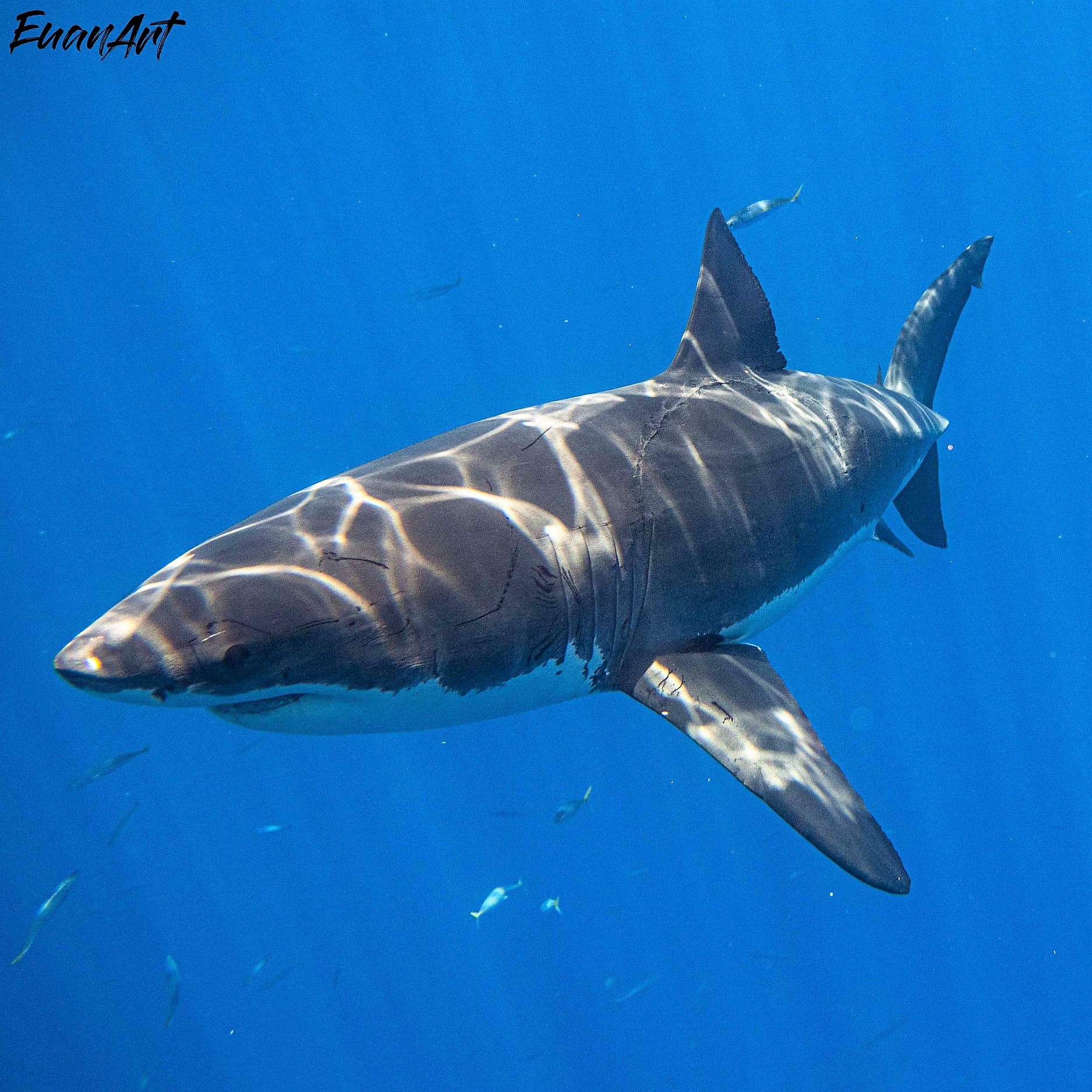 How did the attack happen?

We most likely know the “why”, although a 28’ shark putting the bite on one almost a third its size may, in fact, have been an attempt at predation. A huge shark would be much slower than one that much smaller, and given the chance to grab an easy meal, may have made the attempt. If so, fast reflexes and a white shark’s tough skin may well have been what saved Seabatch’s life.

As we know, the strike came from the left. It wasn’t a head-on blow, as in two sharks approaching one another and one getting a warning nip. Nor was it for mating purposes. Seabatch is a female (she has no mating claspers), and a white shark well over twenty feet is almost certainly a female. Given that the larger shark t-boned the smaller one, it may well have been an attack that was motivated by hunger. It would’ve slammed into Seabatch, its jaws snapping.

When we look at closeups of the bite, we can see several things. The first is that (see image below) there are tooth scores on Seabatch’s underbelly. This shows how far the attacker’s lower jaw reached as it began to close. The teeth on a shark’s lower jaw (mandible) tend to be thinner and more pointed than those on the upper jaw. Think of a fork and knife. The mandibular teeth are the fork. They pin the prey, and then the upper jaw (maxillary) teeth extend out and come down like a guillotine, and carve out a huge mouthful.

In Seabatch’s case, it wasn’t merely an open-mouth “push” as white sharks sometimes do. In cases like that we see only marks from the maxillary teeth, almost like a punch with teeth on the end. Here, we see actual scoring from the mandibular teeth, so an attempt was made at an actual bite. Additionally, and this is where it gets interesting, if you look at the indications I made on the photos below, besides the main bite, we can see an indication to the left of it where a second bite or snap took place. The impact of the initial bite undoubtedly pushed the smaller shark through the water, and it flailed to escape as the bigger one attempted to bite down. When the bite failed to really dig in, the larger one made a last-ditch attempt to reacquire its prey and snapped at it, with the teeth from the left side of its upper jaw digging in just enough to leave a slash mark behind. You can also see a deep second groove on the right side of the initial bite. This was also caused by the second “snap”, with the right-side teeth digging in deep, but the left failing to gain traction. Seabatch must have twisted to her right while “rolling with the punch”.

All things considered. I’m leaning more toward this being a failed attempt at predation. There is no way an 11’ shark would attempt to stand up to one 28’ long. The attack came from the side, an attempt was made to pin the smaller animal with the lower jaw teeth, and another bite was attempted when that failed. We may well have a huge fish out there that will prey on its own kind when opportunities arise.

How Big Was the Attacker?

Length we’ve already covered. In terms of weight, and scaling up from a twenty-foot white shark’s upper mass estimate of 5,000 pounds (we’re using the upper est. because a larger shark would, per force, be proportionately more massive than a smaller one of the same species), a 28-footer would weigh around 13,700 pounds, or nearly 7 tons (6,200 kg). Is it a gigantic or mutant white shark? Maybe. Could it be something else? Possibly. I addressed both these points and more in M&MM. Sadly, only time and additional evidence – or a specimen – will tell us for sure.

Either way, if I was a scuba diver in any of those areas, I’d be thinking long and hard before planning my next trip.

Thanks for stopping by. I hope you enjoyed the post. If you haven’t picked up a copy of Monsters & Marine Mysteries yet, click the title for a direct link. You’re welcome to try Amazon’s FREE Look Inside feature, that lets you read a portion of the book prior to purchase. 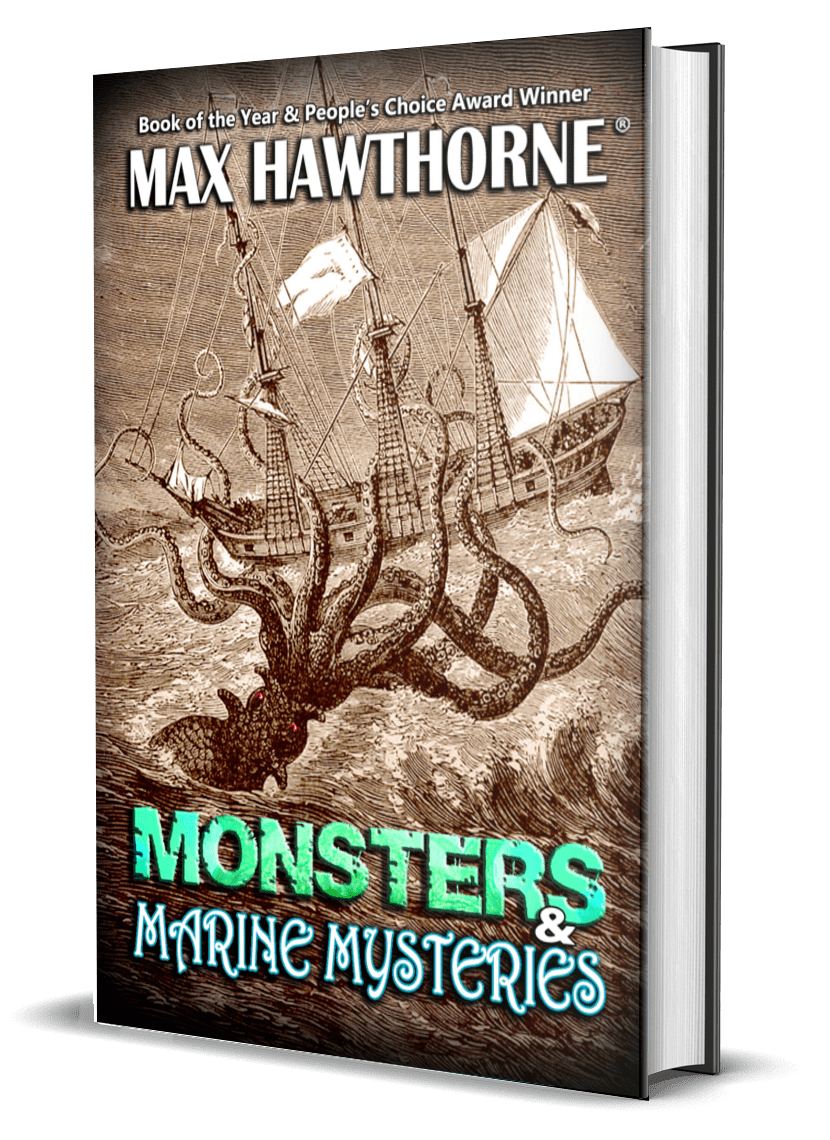