Now the fun part. Do you love the Jaws franchise? If so, then you’ll love this author who I am featuring this week. He has a series of novels, yes, lots, and he provides a unique perspective to his novels because of his hobbies. Read the interview below and get to know our featured author for this week’s blog.

Tell your readers a little about yourself; where you grew up, where you live now, where you went to school etc. Let them get to know the personal you.

I was born in Brooklyn and attended school in Philadelphia, where I graduated from the University of the Arts. Nowadays, I live in Buck’s County, PA. I love the water. Besides being a passionate angler, I’m also a dedicated conservationist. I like to stay active. My hobbies include fishing, boating, boxing, and the collection of fossils and antiquities. At home, I share my office with my daughter’s cat, Mace, an outsized Lynx Point Siberian Forest Cat with a particularly wry sense of humor. When he’s not lying in wait for me underneath some piece of furniture, the “Minister of Fluff” sleeps on my desk as I write.

How has your hobby of angler fishing enhanced your plots?

I’m a firm believer that being able to draw from personal experience contributes to more realistic writing. A lot of my novels include very intense marine scenes, both above and below the surface. At the risk of sounding egotistical, I’ve seen other authors who have tried writing in the same vein, only to fail to achieve a suspension of disbelief. Let’s face it; it’s hard to describe the lung-searing, tendon-tearing strain of holding on for dear life as a 12-foot shark screams line off your reel and nearly pulls you over the side unless you’ve experienced it firsthand.

What inspired you to write this book?

The basic idea behind Kronos Rising – the principal characters, set pieces, etc. – was in my head for ages. I was hesitant about starting the project, however. It was intimidating.

I knew KR was going to be a big book and I wanted it to be terrific. I think what finally inspired me was a 2002 trip I took to the Florida Keys. I was in Marathon, and I had the chance to board the sistership to Hemingway’s beloved Pilar. I sat in “Papa’s” fighting chair, at his writing desk, and even got to tap away at the typewriter he used to write The Old Man and the Sea. It was strange, but it was like he was whispering in my ear. I just knew the time was right for me to begin my journey.

When did you begin writing?

If I discount the poetry I used to do in college, I took my first stab at writing some twenty-two years ago. I used to do small self-help and conservation-geared pieces for an assortment of outdoor magazines (Field & Stream, Outdoor Life, In-Fisherman, Sport Fishing). However, the formal manuscript for what would one day be Kronos Rising didn’t begin until 2003, with the first draft completed a year later.

Are there any authors who inspired you growing up or who inspire you now?

Absolutely. I believe most authors catch the writing ‘bug” from others who inspire us and let’s face it; quality prose is highly contagious. My list would include Edgar Rice Burroughs, Robert E. Howard, Terry Brooks, Peter Tonkin, and Stephen King. I enjoy their writing style and their ability to create compelling visuals in the reader’s mind.

What were your struggles or obstacles you had to overcome to get this book written?

I’m a self-taught novelist so, inevitably, I was faced with a serious learning curve. I ended up rewriting Kronos Rising four or five times – quite the ordeal, considering the book is over 190,000 words. Thankfully, I’m tenacious, and the end product was worth all the harsh criticism people threw my way, the sleepless nights, and the endless revisions. At least, that’s what I like to tell myself . . .

Tell your readers about your book.

For me, Kronos Rising is the ultimate what if story. What if an “extinct” marine predator, the most dangerous creature to ever inhabit the planet, was suddenly set free? With our sharks and whales nearly wiped out by mankind’s greed and avarice, what could stand in the way of an animal that viewed human beings as nothing more than hors d’oeuvres, to be snapped up without a second thought? What would stop it from multiplying and regaining dominance over Earth’s oceans? However, it’s not just a man-versus-beast story (although that’s certainly an element). The key to any good action/adventure/thriller is conflict, and Kronos Rising has plenty. There’s man against monster, man against nature, man against man, man against his own nature, and even the creature’s internal conflict (it is torn between the world its ancestors once ruled and the one it now faces). Combine all of that with a well-crafted cast of characters, each flawed in their own, special way, and you’ve got the makings for a story that many have found hard to put down. When a reader wrote in to say she kept walking into walls, because she refused to stop reading and carried her Kindle with her wherever she went in her home, I knew I’d done my job.

Who is your target audience and why?

My target audience is anyone who enjoys a good adrenaline-pumping, bite-your-nails kind of read. Naturally, if you’re a fan of Michael Crichton’s Jurassic Park books, my work is tailor-made for you. However, I write for everyone, not just thriller/horror aficionados. The spotlight in Kronos Rising is shared between two principal protagonists, Jake Braddock, and Amara Takagi. Jake and Amara are unique. They’re relatable and inspirational, but they’re also damaged physically and/or spiritually. And it’s their struggles to overcome not only the many antagonists they face, but their own inner demons as well, that appeal to a larger audience than one would think. I was privileged to have retired movie star Mara Corday edit my manuscript, and I was touched by her feedback. Mara typically enjoys romance novels and expected my story to be a bit of a stretch. As it turned out, however, from the opening scene she was so into the story that she would harass me every other day for the next chapter so she could get her Kronos Rising “fix”.

What one unique thing sets you apart from other writers in your genre?

I think it’s a combination of two things: the accumulated experiences brought on by my adventurous lifestyle and the fact that I am innately artistic. Even as a child I could draw, paint, and sculpt. I attended an art college, and my original field of study was film/animation. So, for me, the writing process basically entails me converting what I see in my mind into the written word. When it flows, it flows easily and naturally, and it’s a blessing, to be able to make people feel like they’re really there, watching a scene unfold. In my reviews, a description of this usually sounds like, “I felt like I was watching a movie; I could see it happening in my head”. For me, as an author, there’s no higher form of flattery. 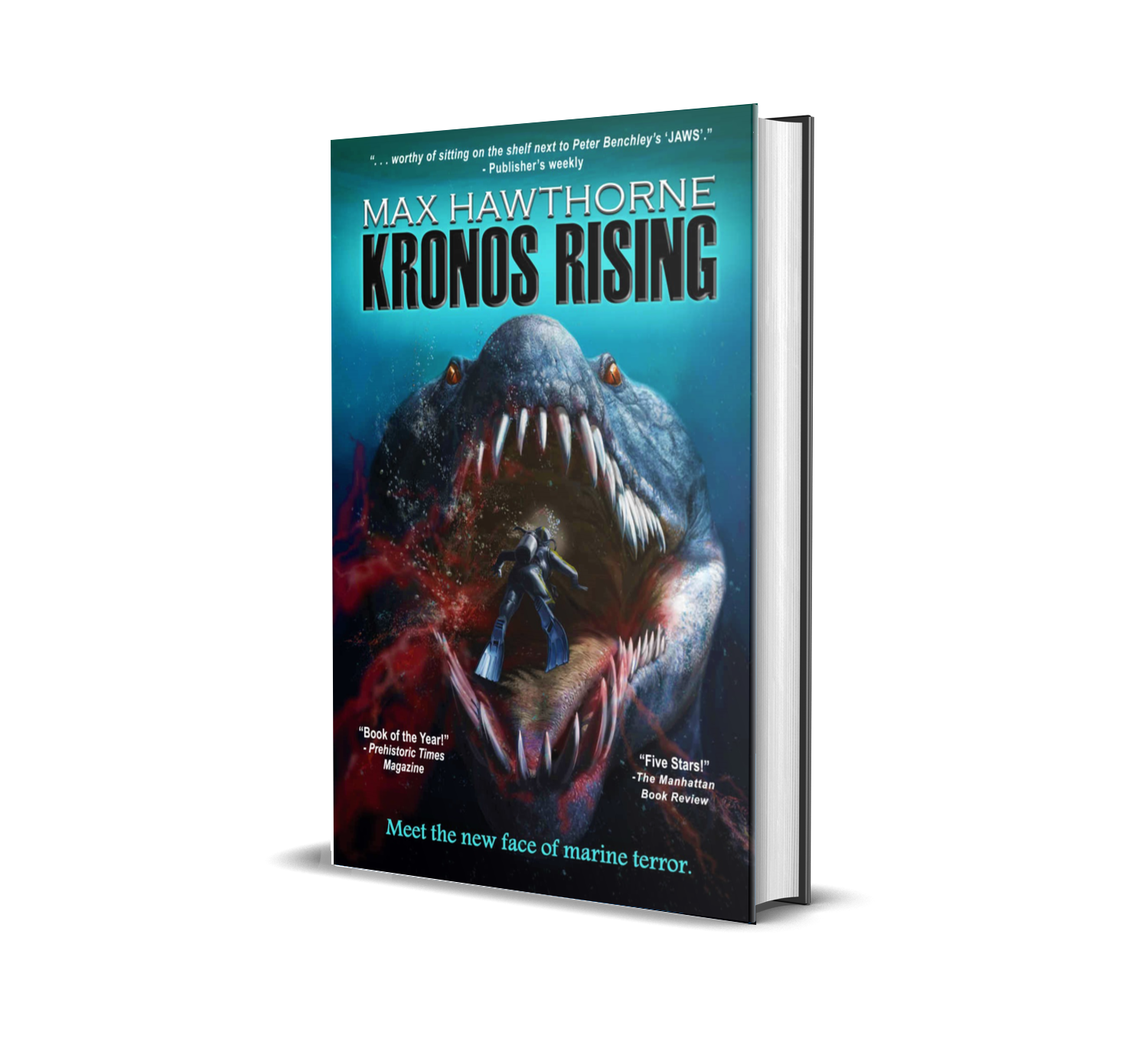 Tell me a little about your podcast and where to listen in on it?

My podcast is Max Hawthorne’s Marine Mysteries, and it’s a monthly show done on Blog Talk Radio. My co-host and I typically discuss unsolved sightings of strange marine animals, like bus-sized sea turtles, extant mosasaurs, and even the legendary Kraken. I take questions from readers and also raffle off a prize among those who have had their question read on the air. If you go on Facebook and look up the MHMM group, all the episodes are there.

What is your next book? Tell us about it.

Tell your readers anything else you want to share.

I’m very gregarious when it comes to interacting with readers, and I can often be reached via social media like Facebook if you ever want to say hi. My new author’s website just went live, and I hope you get to visit it. Also, if you have Amazon’s Kindle Unlimited program, many of my books are available through it. Lastly, thank you for allowing me and my monsters into your hearths and hearts. It’s an honor to be there.

Kronos Rising: After 65 million years, the world’s greatest predator is back.