T. Rex was NOT a sensitive lover. In fact, it may have lived in fear of being eaten.

It appears that History’s mightiest terrestrial predator was not without fear, something scared T rex , but what was eating it?

If you follow trends in paleontology like I do, you’ve probably seen at least one post from paleontologists, touting their theory that Tyrannosaurus rex was a “sensitive lover”. I believe even the phrase, “enjoyed foreplay” has been tossed around. (no, this is not a campaign for an adult film, starring “Rex Randy”) The theory is a real one and is, from what I’ve gleaned, based on a study of Daspletosaurus, a progenitor to Tyrannosaurus rex. https://www.nature.com/articles/srep44942  It evaluated the foramina (sensory pits) found on the dinosaur’s muzzle (maxillae/mandible) and concluded that the tissues on a Tyrannosaur’s face, and its snout, in particular, were as sensitive as a crocodilian’s. This has led some to suggest that the animals engaged in romantic mating behavior, rubbing their faces together before, during, and perhaps even after mating. https://roaring.earth/t-rex-sensitive-lover/?fbclid=IwAR0HjRN3a-fKXeEU-9HdyelMFKTHoXNy0oF3pWbB4yb4wPWG4Z-bsAU-oI8

For the record, I’m not here to rain on anyone’s parade. Sure, it’s possible that T-rexes, and theropods in general, for that matter, engaged in mating behavior that involved some sort of foreplay. Heck, crocodiles do it, so why not T-rex?

if you were an amorous male whose mate or prospective mate was as big as you, and who was armed with the deadliest bite of any known terrestrial carnivore, you’d probably want to be “warm things up a bit” too, before trying to score. Then again, for all we know theropod mating might have been like that of today’s big cats, with the male seizing the female by the nape to establish dominance and immobilize her. Given the potential awkwardness of two ten-ton bipedal titans copulating (the sheer size, balance, their tails getting in the way, etc.), I’m sure a still target would increase the male’s chances of success.

Regardless, and as paleontologist Dr. Mark Smith once pointed out to me, the simplest explanation in most situations usually is the correct one. I believe that applies here as well. If the mating behavior of theropods was on the sensitive side, they were probably taking advantage of, and relishing, sensory systems that they had evolved for an entirely different reason. But, if so, what was that reason? If their sensory pits didn’t evolve to turn them into the Seducers of the Santonian (yes, I coined that term), then why did Tyrannosaurs have them – and both genders, by the way. My theory, and I think it’s a solid, is that the foramina where there to help protect T-rex from other predators. What predators, you ask? What on earth could kill and eat a Tyrannosaur?

THE CREATURE THAT SCARED T REX

Why, a crocodile, of course.

T-rex, and every other theropod that’s ever existed needed something no living creature can do without: water. They had to go to a nearby pond, lake, or river, lower their muzzle, and drink. There was no escaping it. And when they did do this they were at their most vulnerable to the rulers of those bodies of water, including creatures like Deinosuchus.

Before we get into the science aspect, let’s examine how T-rex most likely drank. I believe the Cassowary is the best example we have to compare it to today. I’ve studied footage of ostriches drinking and their technique is similar, except that there is excessive head raising in order to get the water to flow down that long neck.  (If anything, an ostrich would be a good comparison for a sauropod in terms of drinking – write that down).

Let’s look at this video of a Cassowary imbibing.  This is probably similar to what a large theropod did: remaining upright, possibly wading into the water a bit, lowered its head down, then lifted it back to the horizontal to ingest. Note that the bird remains alert the entire time.

Why T rex Couldn’t Fight back?

Of course, while doing this a Tyrannosaur, or any animal small enough to fall on the menu, was a potential target for a big, hungry crocodylomorph. And let’s not kid ourselves and say, “Oh, no crocodile, even Deinosuchus, could take down a T-rex.” Pushing 40 feet, the “dread crocodile” was as large as the largest of Tyrannosaurs, with jaws that were potentially even more powerful. And, let’s not forget, crocodiles often travel in loose “gangs”. Once a prey item is pulled off balance and into the water, it’s a feeding frenzy that no Tyrannosaurus could survive.

Let’s move on to questions like, “Do we have any evidence to back this up?”, “What research has been done to confirm this theory?”, or “Why isn’t there a formal paper on this?” As soon as I put together a team of respected paleontologists that share my vision, I will happily address that last one. Moving along . . .

First, let’s consider crocodilian sensory pits: underwater pressure sensors which are so sensitive that, even in complete darkness, tested alligators have been shown to turn their heads in response to ripples created by a single drop of water. With Tyrannosaurs having foramina similar to those of crocodilians, you can bet that when they lowered their heads to take a drink, their senses were straining to detect any kind of disturbance in the water around them. The tiniest displacement could indicate a pending attack from a croc of some kind and give them a split-second to rear back and save themselves.

For those of you that may harbor doubts about the foramina on Tyrannosaurs being adept at sensing objects in the water, let’s look at the theropod king of facial sensors: Spinosaurus. As this 2005 study showed, Spinosaurus had pressure sensors similar to that of crocodiles and could hunt in complete darkness. Its foramina allowed it to sense movement in the water, even if it couldn’t see. This would have been an invaluable tool for a  scared T Rex, which was regularly forced to dip its face into murky water, not knowing what might be waiting. 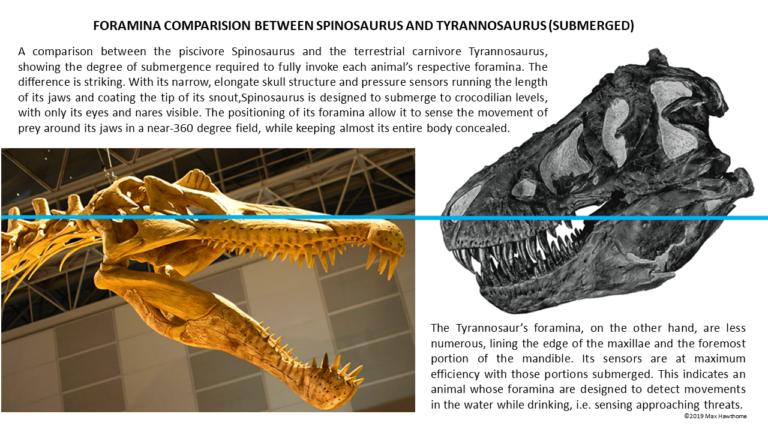 Interestingly, this type of pressure sensing it not unique to Tyrannosaurs. In fact, it goes all the way back to the late Triassic, 231.4 mya, when theropods first appeared. If you look closely at its skull, you can see that even Coelophysis was starting to develop them.

Back then, fledgling dinosaurs faced the same threats that T-rex would one day. No, there weren’t crocodiles during the Triassic, but there were the next best things: those miracles of convergent evolution known as phytosaurs. Phytosaurs were large, carnivorous, archosauriform semi-aquatic reptiles that had a nearly global distribution. They were very similar to crocodiles, and had similar feeding habits.

Behemoths like the monstrous Smilosuchus, estimated at 7-12 meters, and with serrated fangs to boot, would have been a nightmare for any dinosaur of its time. https://en.wikipedia.org/wiki/Smilosuchus

The Phytosaurs lasted until the end of the Triassic, with some fossils found in Early Jurassic strata, suggesting their range may have extended beyond the Triassic-Jurassic boundary. Of course, following the phytosaurs came a variety of crocodylomorphs, eventually including the aforementioned Deinosuchus, as well as titans like Sarcosuchus imperator, which probably posed a threat to the contemporaneous Carcharodontosaurus. Putting it bluntly, there were always threats in the water, something huge and hungry, waiting to lunge out and make a meal of the unwary. It makes perfect “sense” (pun intended) that landbound theropods evolved defensive mechanisms such as facial foramina to help them survive.   https://en.wikipedia.org/wiki/Crocodylomorpha

In an effort to be all-inclusive, I should point out that these pressure sensitive foramina/pits were present on most, if not all theropods, and support my position that the animals evolved them to counter the omnipresent threats they faced. If you look at the skulls of these assorted meat-eaters, starting with Tyrannosaurus rex, of course, you will see that, older or younger, small, medium, or giant, they all have them.

An Interesting Parallel between a few of our Extant Predators

Lastly, let’s draw an interesting parallel between a few of our extant predators, ones that share relationships with extant crocodilians similar to what T-rex had with the primeval crocs of its day. I’m referring, of course, to today’s lions and tigers, and the crocodiles they are forced to deal with.

When we consider the African lion and Bengal tiger, we’re looking at apex predators – big cats that can weigh in excess of 500 lbs.. On land, they are fearsome – agile, fast, and powerful. But once pulled off their feet and dragged into the water, they are vulnerable. Nile crocs can and do kill lions, and even a tiger can be killed by crocodiles: https://www.telegraph.co.uk/news/worldnews/asia/india/8695915/Fifteen-foot-Bengali-crocodile-claims-king-of-jungle-title-from-tiger.html

Crocodile attacks on big cats are surprisingly common, yet the cat often manages to escape. How? They lap up water, thus they don’t stick their snouts in like a theropod would, so how do they know danger is coming? The answer is that they have a sensory system of their own that is similar in function to the foramina of extinct theropods: their whiskers.

A cat’s whiskers can perform amazing feats, including gauging the distance of objects and sensing changes in vibration and movement in the air. Thus, they can sense the air above the surface of a body of water being disturbed as a large body moves under it and, if their whiskers are dipped in the water, they can sense the water itself being pushed as a predator moves to attack. https://www.livescience.com/44196-why-do-cats-have-whiskers.html

If we look at these images of big cats drinking, it gives a good idea as to how their senses and sensors are constantly straining, trying to anticipate danger in the water they must drink in order to survive.

In summation, although it’s not impossible that Tyrannosaurs were the romantic “Cads of the Campanian” (another Max Hawthorne original), both Occam’s razor and a mountain of evolutionary evidence indicate that the primary reason for their pressure sensitive pits was to keep them from becoming what they viewed everything else as – a meal.

Scared T Rex also proves that even the hunter can become the hunted.

Thanks for stopping by and I hope you enjoyed my theory. If you haven’t checked out my novel, Kronos Rising: Kraken (vol. 2) which includes my first foray into bringing an “extinct” theropod to life, be sure and check it out. It’s book 5 in the series and a high-octane roller coaster ride from start to finish. https://www.amazon.com/gp/product/B07DJZ84VH/ref=series_rw_dp_sw 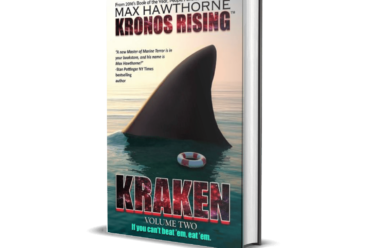