Are There Mountain Lions in Pennsylvania?

Are there cougars, AKA mountain lions, in Pennsylvania?

There have been no “confirmed” reports of mountain lions, AKA Puma concolor, in Pennsylvania since the late 1800s. That said there have been numerous sightings of them over the years. So is the second largest extant cat in North America still managing to eke out a living in the Keystone state?

If you ask me, the answer is yes. My house is in a heavily-wooded area. In fact, the woods literally abut my backyard. Over the years I’ve had whitetail deer visits that number in the hundreds, if not thousands, wild turkeys showing up in groups that often number forty or more individuals, opossum, bobcats, hedgehogs, groups of raccoons, and once, a half-dozen deer that made our resident whitetails look like midgets. They were the size of small ponies, I kid you not, and had to be either mule deer or a small group of female elk. (I know, there are no mule deer in PA, well except for the ones held in canned hunt preserves . . . buy hey, maybe some got out?)

A few winters back, I found an enormous series of cat tracks leading onto my property from the street outside. They ran across my yard, moving alongside my house, then disappeared into the woods. They were definitely cat tracks, no claws at all, and were crisply imprinted in an inch of snow. There was no melting, no expansion. I measured them and they were a solid 4+ inches across. The stride was around 21 inches, and they ambled along at a leisurely pace. The cat must’ve been after the deer that regularly invade my yard at night, usually to eat my neighbor’s arborvitae trees and my holly bushes.*

*Interestingly, that following spring, we had a horrendous stench wafting in from the nearby woods. The smell of rotting flesh was unmistakable. Fearing the worst, I called 911. I went back there with the cop who showed up. There ended up being a half-eaten deer back there, partially covered. That smacks of mountain lion behavior – pun intended.

I was stupid to not take pics of the tracks. Frankly, I was afraid to call it in, as I feared someone would come and shoot the animal. With all the deer in the area, the cat had plenty of prey and I didn’t view it as a potential threat.

The big cat gets caught on camera

Recently, I caught an animal on my security camera’s infrared setting, moving past my rear egress stairs and across the back. The footage is dark and amorphous, and very hard to make out. I took a few frames and tried enhancing them, lightening them and increasing contrast. When I did, I discovered the intruder was a large cat. It was far too big to be a house cat, at which point I had to figure out; was this a bobcat or a cougar, and would my results answer the question: are there mountain lions in Pennsylvania?

The uncut and unedited footage is as follows:

Granted, at first glance the clip seems to reveal nothing except an animal with obvious eyeshine moving furtively along.

After enhancing a few frames, however, I was able to deduce that it was, indeed, a large feline of some kind.

The above frame, although admittedly still amorphous, is at least telling. First, we can discern from the flattish face and forward-facing eyes that we are looking at a cat of some kind. There is a low-slung head and neck, high shoulders, and a long back. Although no tail is visible, in terms of proportions, it appears more like a mountain lion than it does a bobcat, which tend to have shorter, more compact bodies and comparatively longer legs. It could, of course, also be an exceptionally big house cat, but how to find out?

My next task was to estimate the size of the cat. Luckily, the camera is static, and there are plenty of objects in the frame that can be used to compare scale and positioning. The cat appears to be directly behind the railing as it moves past. Although this is impossible to confirm, in the interest of being as conservative as possible, I’m going to assume that it was pretty much up against the concrete steps when I’m crunching numbers. It probably wasn’t; it was more likely 1-3 feet away, in which case my estimates will need to be scaled up a bit. It’s a matter of perspective. You know; the closer an object is to the lens, the bigger it appears. It’s the basis of a classic fishing trick; you hold a fish a bit away from you to make it appear larger for the camera. The same thing applies here. But, again, for purposes of being conservative, we’re going to assume it was right by the step when it was filmed.

This was fortunate, of course, as I was able to use items in the frame for comparison, to match the size of said images and the steps in additional photos. For the sake of clarity, the lowest portion of the wall supporting the railing to the right is 6.75 inches in height (this is directly beside and in front of the cat in question). There is also a drop of 7 inches from the top step to the ground/grass outside. This means the cat in question is at least 7 inches taller than it appears in the film. I used myself taken by the same camera and in the same exact location for reference, and as you can see from the frame below, my feet and ankles are missing. This confirms the drop. I also took a tape measure with me. With my daughter’s help, I held the tape measure to the ground and pointed at assorted measurements on it. We ended up using the 18-inch mark for comparison, as it was pretty much spot-on.

This accomplished, my next move was to do a transparency overlay, in an effort to line up both images perfectly. This would show how tall said cat was, compared to both me and the tape measure I am holding. If it was just a house cat, it would be obvious.

I was able to match the images perfectly in terms of scale, size and position. So, this is a fairly accurate comparison, with the caveat that I am, once again, assuming the cat was right near the step. My toes were literally against it. If it was NOT, and it is a yard away, it is significantly larger. That said, even if it is against the step, if that is a house cat it is ginormous. I’m 6’1″ tall and it comes up to my knee. Our smaller Siberian, Mace, is 12″ (one foot) at the shoulder and weighs a good 15 pounds. This animal is much bigger.

My next step was to gauge the shoulder height of the cat. As the following image shows, it is the same height as the spot on the tape measure, which was 18 inches. This indicates the cat has a minimum shoulder height of 1.5 feet (again, if it was further back when filmed it could be larger). 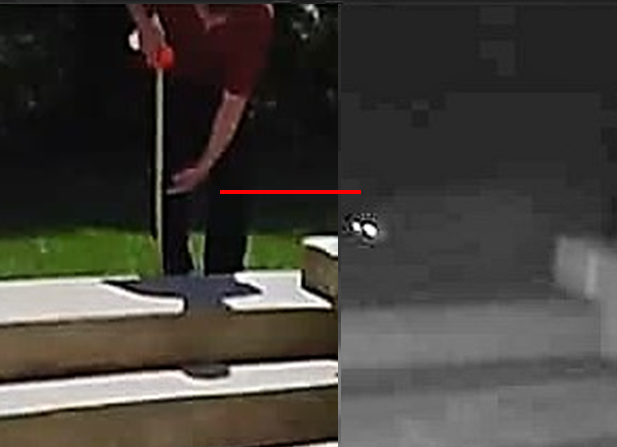 As you can see, the cat’s shoulder measures the same as the indicator, i.e. 18 inches. Could it be a bobcat? It’s distinctly possible. Bobcat heights are listed as ranging from 12 to 24 inches. Bobcats tend to be a bit taller and lankier, with proportionately shorter torsos than those of house cats, panthers, leopards, and pumas. The maximum weight for a large male is listed at 40 pounds. Cougars, on the other hand, typically range from 23-28 inches at the shoulder (with some odd reports listing 35 inches maximum), with a weight ranging from 75-250 pounds .

Based on the image below, wherein I have used red dots to outline the cat’s body, I am a bit hard pressed to say that it is a bobcat. It appears proportionately longer, and more “pantherish”. However, that said, this past winter we did have a very large bobcat attempt to take a deer behind the house. I found tracks of it charging an adult whitetail, followed by its tracks stopping where they met, which indicated it had attached itself to the deer and was trying to bring it down. The doe bolted for the trees with the cat still attached, and every 6 feet or so you could see a large impression in the snow, which must’ve been the cat’s rump as it was hanging on with teeth and claws. Based on the available imagery, it’s impossible for me to say with confidence whether we’re looking at a huge bobcat or a small cougar/mountain lion. The question that remains is: if it was a house cat or cougar, how big would it be? 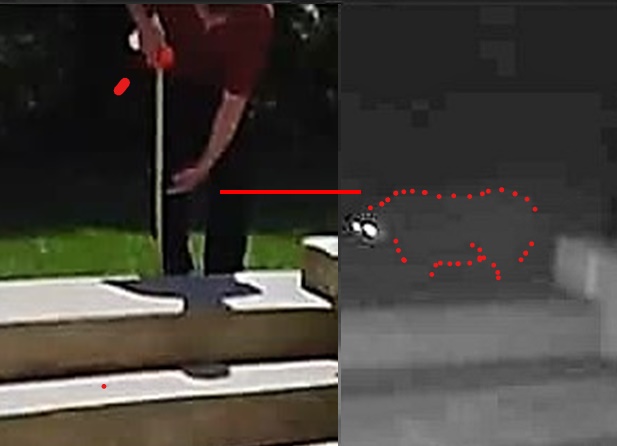 Using our cat Mace, again, as reference, let’s try and see. Mace weighs a bit over 15 lbs and stands 12″ at the shoulder. He’s fairly lean and well-muscled, as he’s a dainty eater and play-brawls constantly with his larger brother, so he’s hardly obese. If I scaled Mace up to the filmed cat’s minimum shoulder height of 18 inches, it suggests a body weight of just over 50 pounds. That’s outside the maximum known range for a bobcat, and way beyond the size of any healthy house cat that isn’t built like a sausage. Our visitor is also far too tall to be a house cat, so that’s out. Of course, bobcats are proportionately a bit taller than a cougar or house cat, and if it is a bobcat my weight estimate could be off. If it is a cougar/mountain lion, it’s probably a young one that’s wandering around, looking for food. Yet, again, we’re assuming that our mystery cat is right up against the steps. If it’s further back, it could be a far larger specimen and could conceivably weigh twice that. It’s impossible to say.

Although I suspect that the cat filmed is not a bobcat (it’s certainly not a house cat), I can’t say for sure that this proves there are mountain lions in Pennsylvania. If I go by the huge tracks I found three years ago, I’m convinced that there are. But I’ll leave it up to you, my readers. Cougar or Bobcat? Feel free to reach out with your opinions, via Facebook or Twitter. And while you’re here, make sure you check out my free books page and help yourself.